The Wolf & The Shepherd

Our AI Future With Kordell France 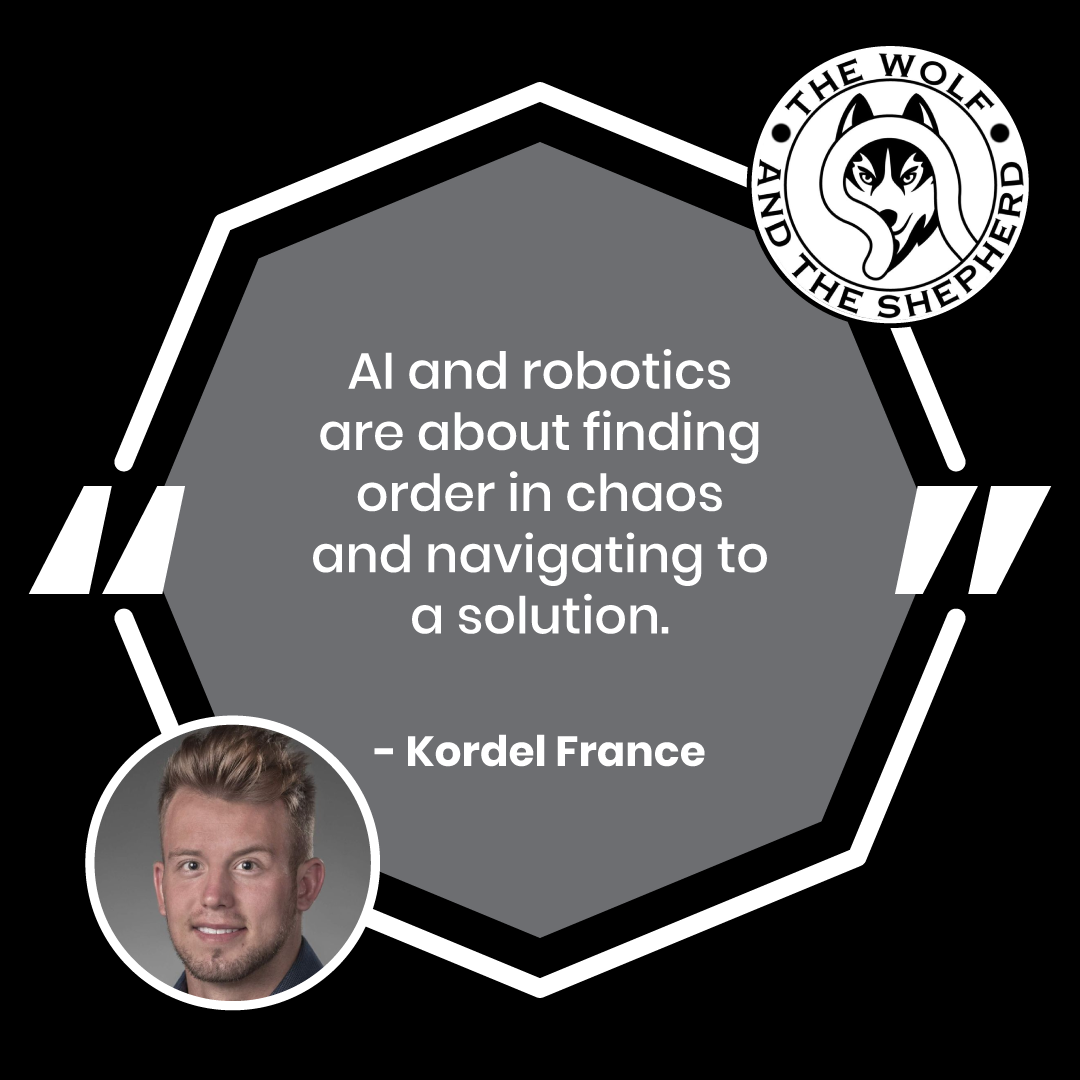 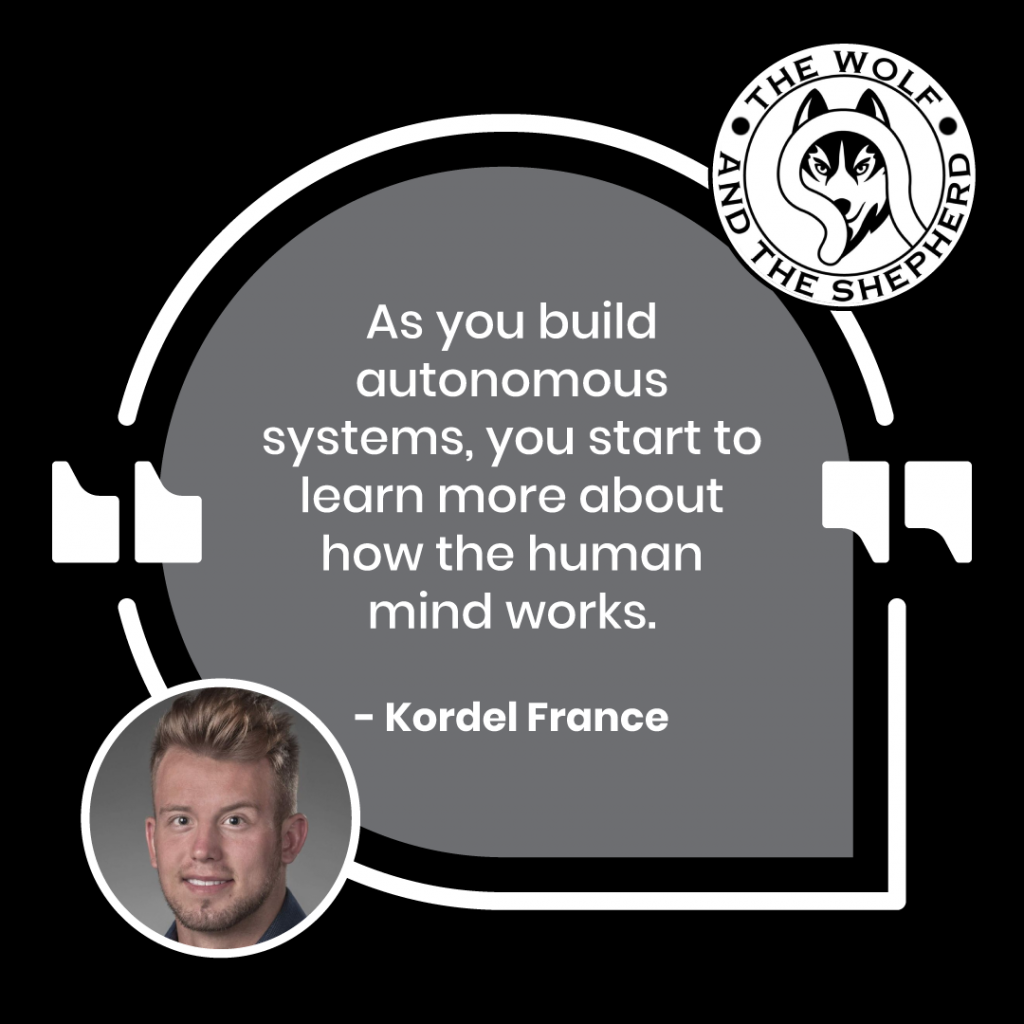 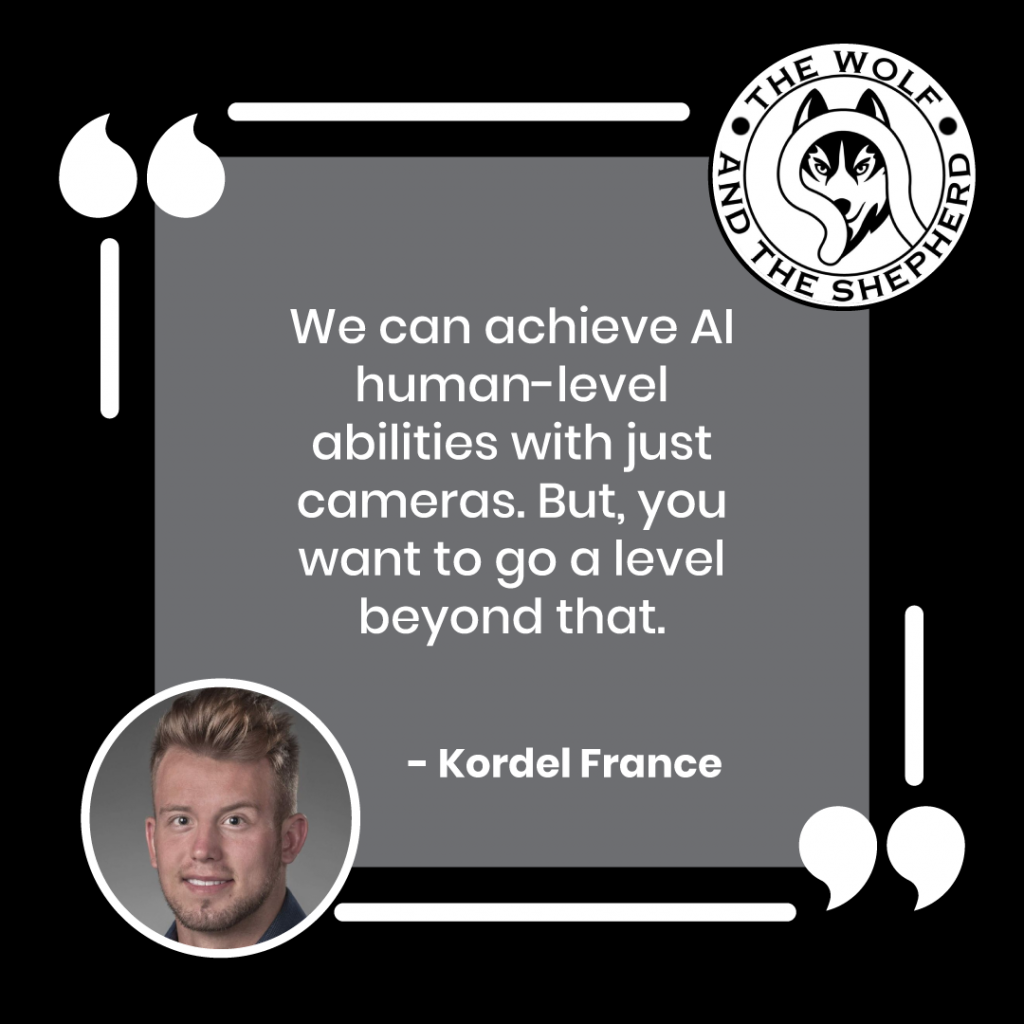 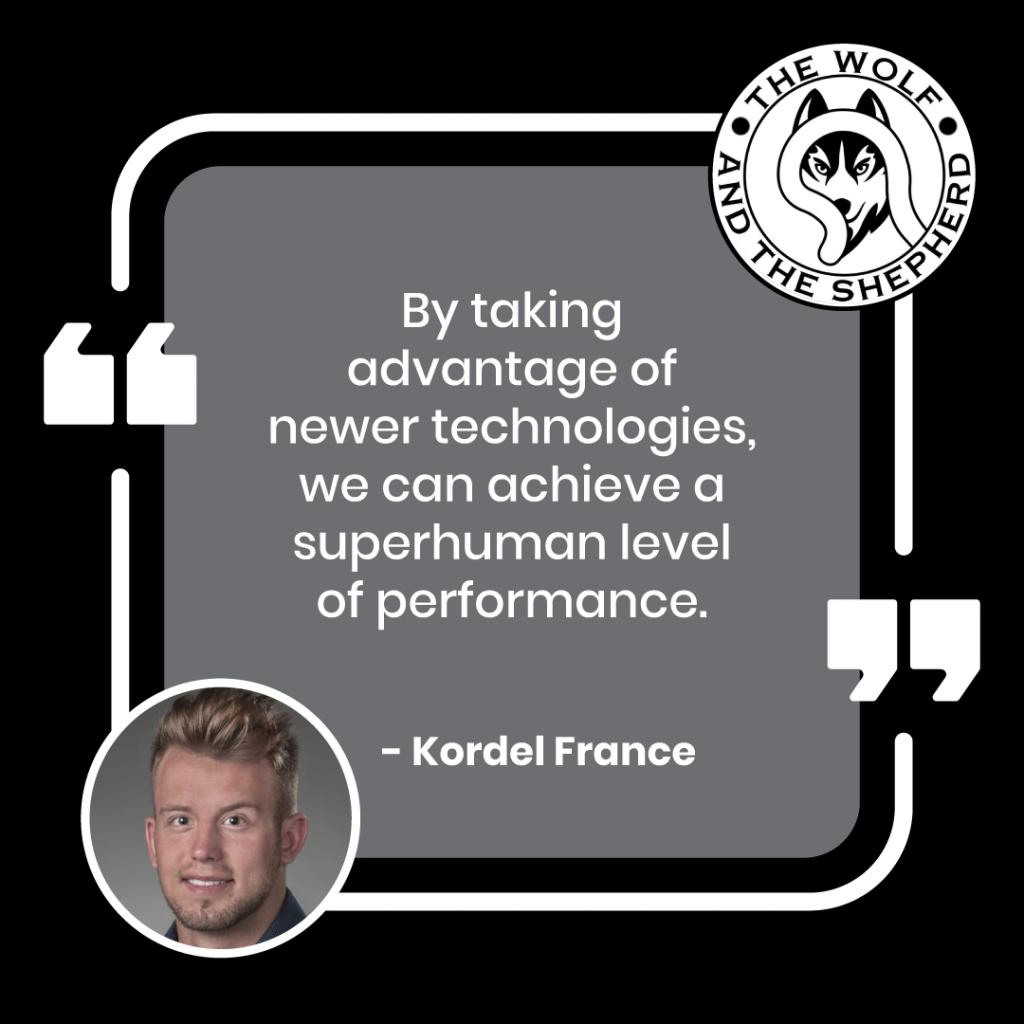 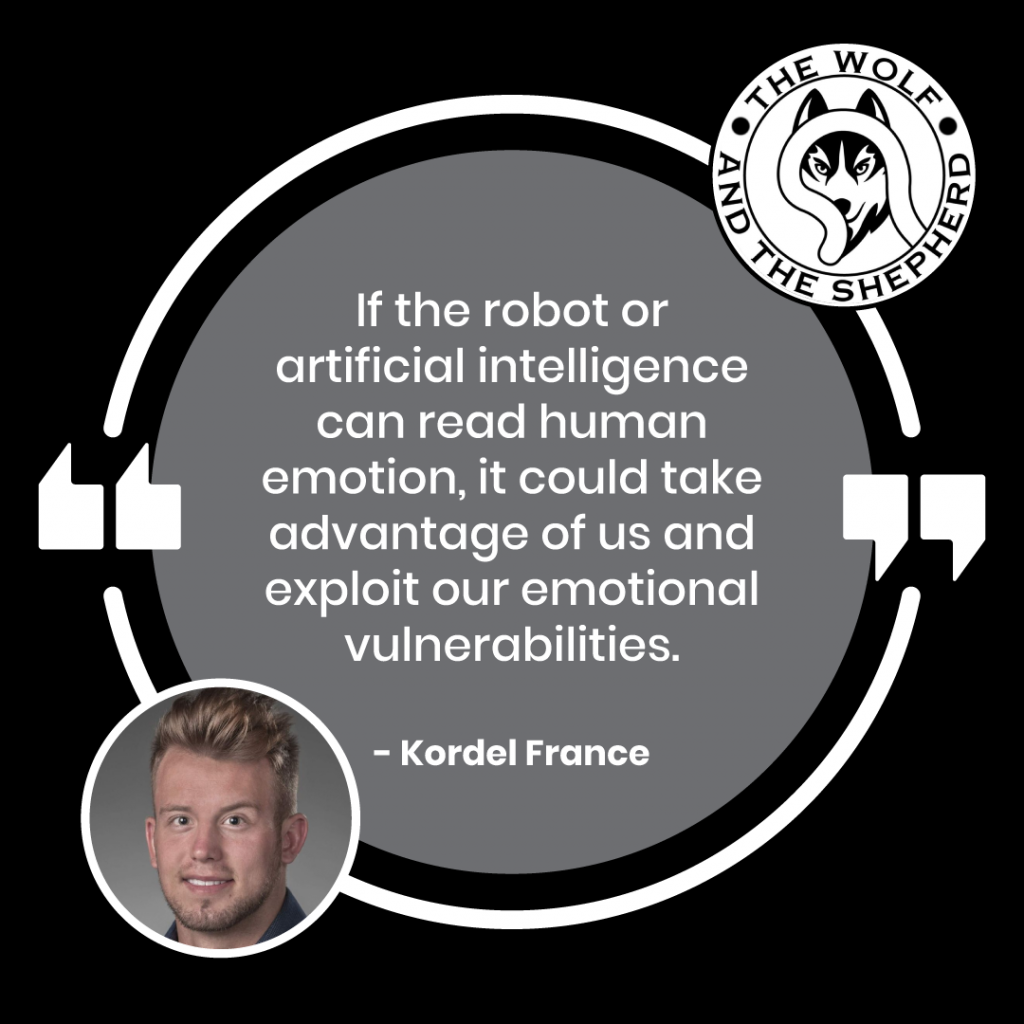 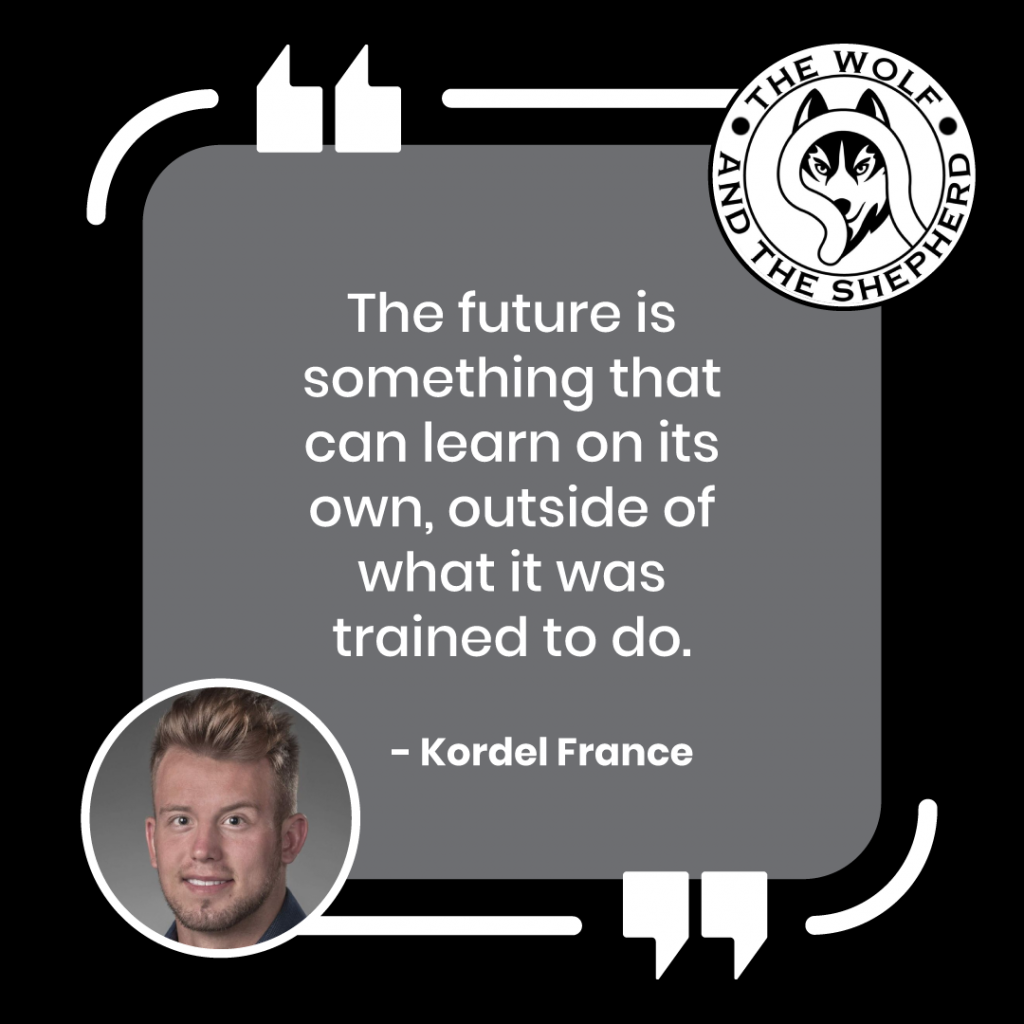 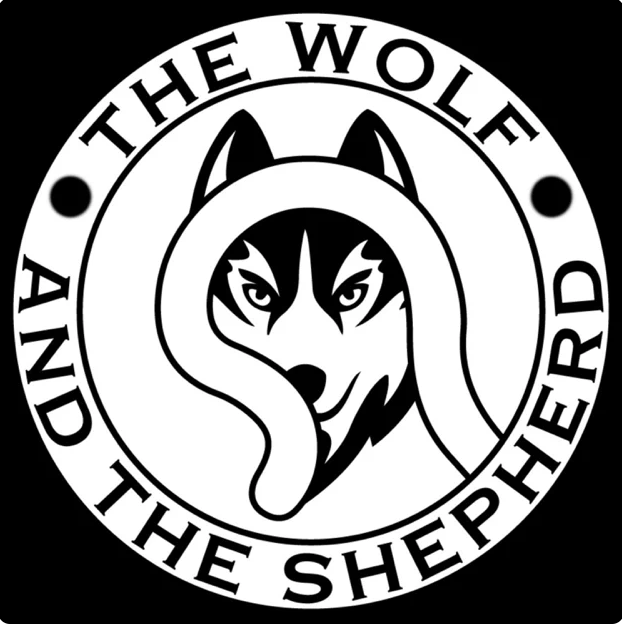 “AI and robotics are about finding order in chaos and navigating to a solution.” – Kordel France

“As you build autonomous systems, you start to learn more about how the human mind works.” – Kordel France

“We can achieve AI human-level abilities with just cameras. But, you want to go a level beyond that.” – Kordel France

“By taking advantage of newer technologies, we can achieve a superhuman level of performance.” – Kordel France

“If the robot or artificial intelligence can read human emotion, it could take advantage of us and exploit our emotional vulnerabilities.” – Kordel France

“The future is something that can learn on its own, outside of what it was trained to do.” – Kordel France

“One beautiful aspect of AI is that it can make sense of data that we can’t fathom.” – Kordel France

“AI will be able to replicate everything a human can do, with the exception of that gut instinct.” – Kordel France

“The arts and sports are where you draw the line for AI. They’re good for computing stats but not for participating in the games themselves.” – Kordel France

“Our fallibilities and biases actually give us a personality as humans.” – Kordel France

Our AI Future with Kordel France

In this episode of The Wolf and the Shepherd podcast, hosts Tristan Abbott and Max Billington — also known as The Wolf (The Brit) and The Shepherd (The Texan) — talk about “Our AI Future” with Kordel France, founder and CEO of Seekar Technologies.

In the course of the episode, the guys talk a little about Kordel’s background and inspiration that lead him to work with AI and robotics, the status quo of AI, and its potential, future, and limitations. Essentially, they discussed what AI should/can and shouldn’t/can’t be in the future.

Shepherd: So, you mentioned earlier the three areas of AI. Can you go over those a little more in detail, kind of bust those out for us — those three different areas — and kind of [give] an explanation behind what those areas delve into?

Kordel: Absolutely, so those two areas were mobile, explainable, and ethical AI. So, our emphasis on mobile artificial intelligence is being able to make artificial intelligence that isn’t tied to the cloud. AI models [have] these algorithms [that] are usually pretty big. A lot of times, they have to live on the cloud, and your phone or autonomous vehicle or whatever has to send data to the cloud in order to make a decision or to get a sophisticated result back. We compress everything small enough to fit on the device so that everything can operate in real-time.

Because there’s less exposure of your data being to bad actors by not having to transact the cloud — so that’s the mobile aspect, the mobile tier.

The explainable tier is really, probably the biggest and most important of the three. That’s being able to make artificial intelligence that can explain itself just as a human can. For example, if I did have an AI algorithm that can screen for cancer in chest X-rays or radiology scans, it’s hard to trust something that is screening through all these images [and] says this indicates there’s evidence of cancer and this doesn’t.

If it can’t explain why, right, a physician can explain why because it can point to certain things and say, “Well, I know that these areas should be this color, or they should have this shape,” etc. AI does something similar, but it’s kind of like a black box in nature, in that it’s really hard to dive into why it made a certain decision if things go wrong. That’s really something we need to work on as practitioners and engineers of AI because that’s what allows people to develop trust in these algorithms and develop trust in autonomous systems and robotics.

It basically convicts. If you have a facial recognition system — that screening for potential bad actors or potential suspects — it’s convicting one ethnicity over the other slightly more, and it’s unfair.

So we take a particular interest in making sure that we heavily review the data that goes into our algorithms by having multiple types of people come in and look at the data, but also [perform] significant stress testing on the algorithm before it’s published into the field. Those are the three tiers, mobile, ethical, and explainable AI.

Shepherd: The advancements are huge, and I keep thinking about robots and sports, and there was that show where the robots would fight each other, and all that stuff. We’ve talked a lot about cars. I mean, you could have robot race car drivers. Would everybody get first place? Would [they] all [win] if they had the exact same car and the exact same intelligence? Are we gonna lose some of that? Maybe just wondering what’s going to happen next, who’s going to win the game? You know, if you played two teams on Madden, and it was the same team, and they all had the same stats — it’s gonna be a tie every time — are we gonna lose a little bit of that fascination? What’s next? What’s coming up by shifting all this towards AI?

Kordel: It’s interesting because I was just thinking about that the other day, right? If part of the reason why I like going to concerts and go into sports is that I like to see humans that more or less have the same handicaps as me — I mean, from a general statement right there — they’re able to perform at a much higher level — like they’re still human — and they can perform and do some incredible things.

That’s why we like to go see them. If you have AI that has all these superior capabilities, and they all have the same capabilities, would things still be as interesting to watch?

Like, would I still go watch a football game, and there’s a bunch of robots playing each other that could throw a 90-yard touchdown pass? It would be cool for a little bit, but being able to kind of relate everything back to a human level to say, you know, Lebron James is still human, and you know, Michael Jordan is still human, and they did some phenomenal things… that’s why we want to go see them.

You know, Eddie Van Halen was still human and could play the guitar way better than I would, and that’s my own personal human bias kicking in. And that’s where you draw the line within the arts and sports. Maybe AI is better at computing stats for who threw the most touchdown passes, who had the most rushing yards, etc., instead of actually participating in sports. But, you know, if we have AI Olympics in 2040, that’ll be interesting.

The Wolf & The Shepherd Podcast features a Texan and a Brit, with the occasional guest. The hosts discuss topics covering politics, pop culture, science, technology, society, controversy, history, comedy, music, and whatever else they find interesting. Coming from different backgrounds, The Wolf (The Brit) and the Shepherd (The Texan) offer a no-holds-barred approach to all topics, keeping an open mind and giving you a laugh every now and then.

Kordel France is the founder and CEO of Seekar Technologies, a technology startup that builds artificial intelligence products for various industries.

Seekar, while still a startup, has put three different medical AI products through four board-reviewed clinical trials. In response to the COVID-19 pandemic, Seekar contributed two products free of charge to physicians to help ease demand on medical staffing and screen for the virus faster. They are currently building the first clinical AI tool to advise neuropsychologists in diagnosing mental disorders.

Kordel remains at the forefront of AI development and would be happy to discuss its potential impact on a wide variety of industries in the future!