How Fathom.Video Validated a Market Problem and Built a Notetaking Solution 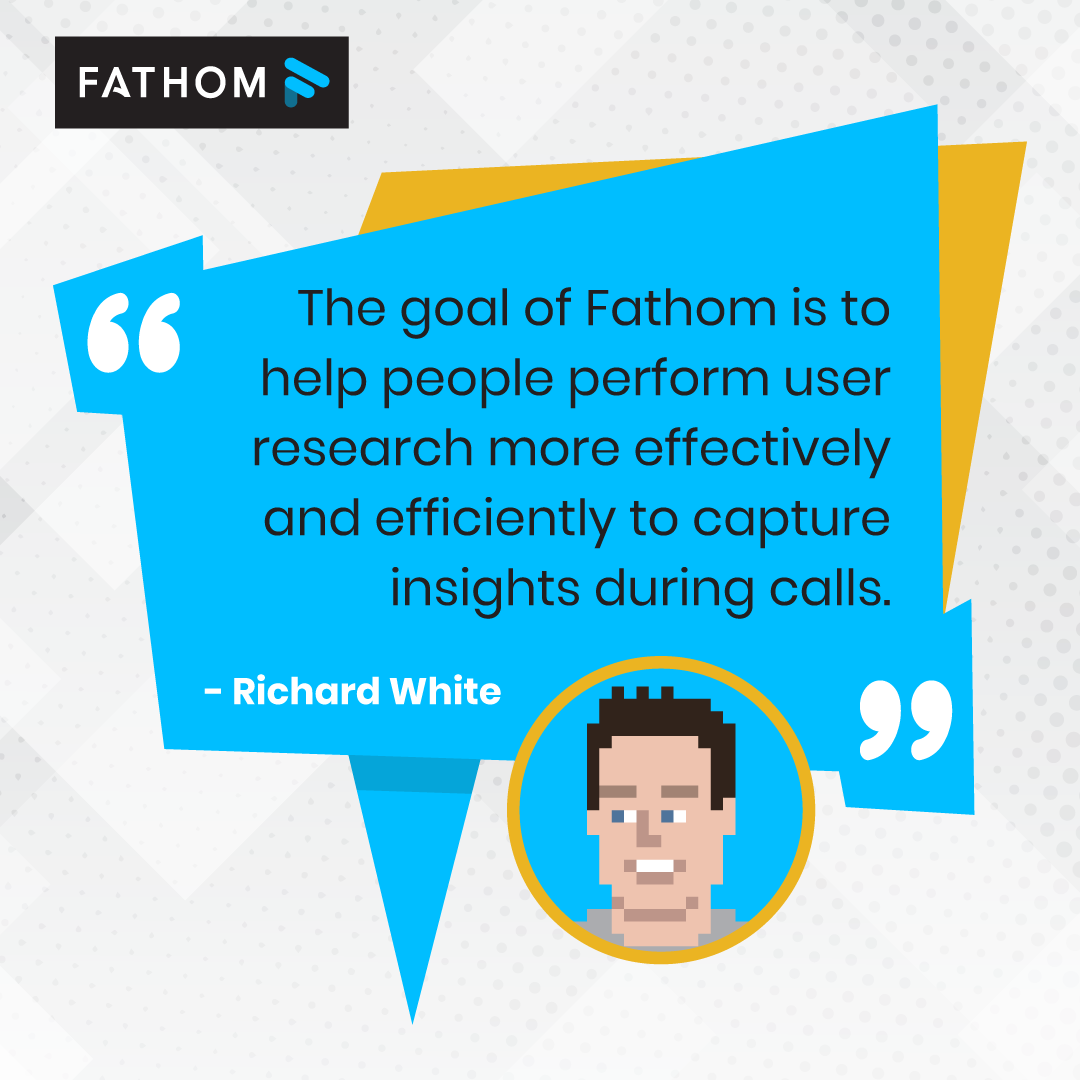 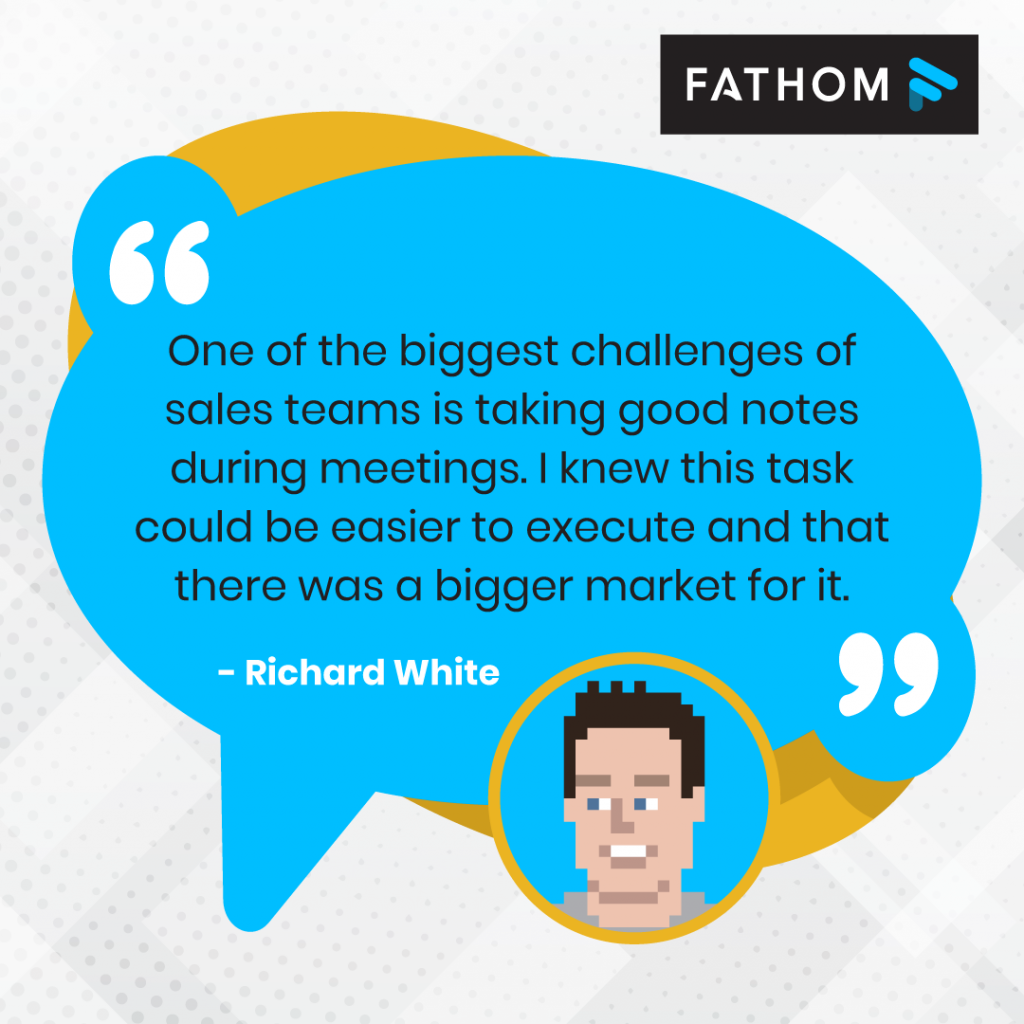 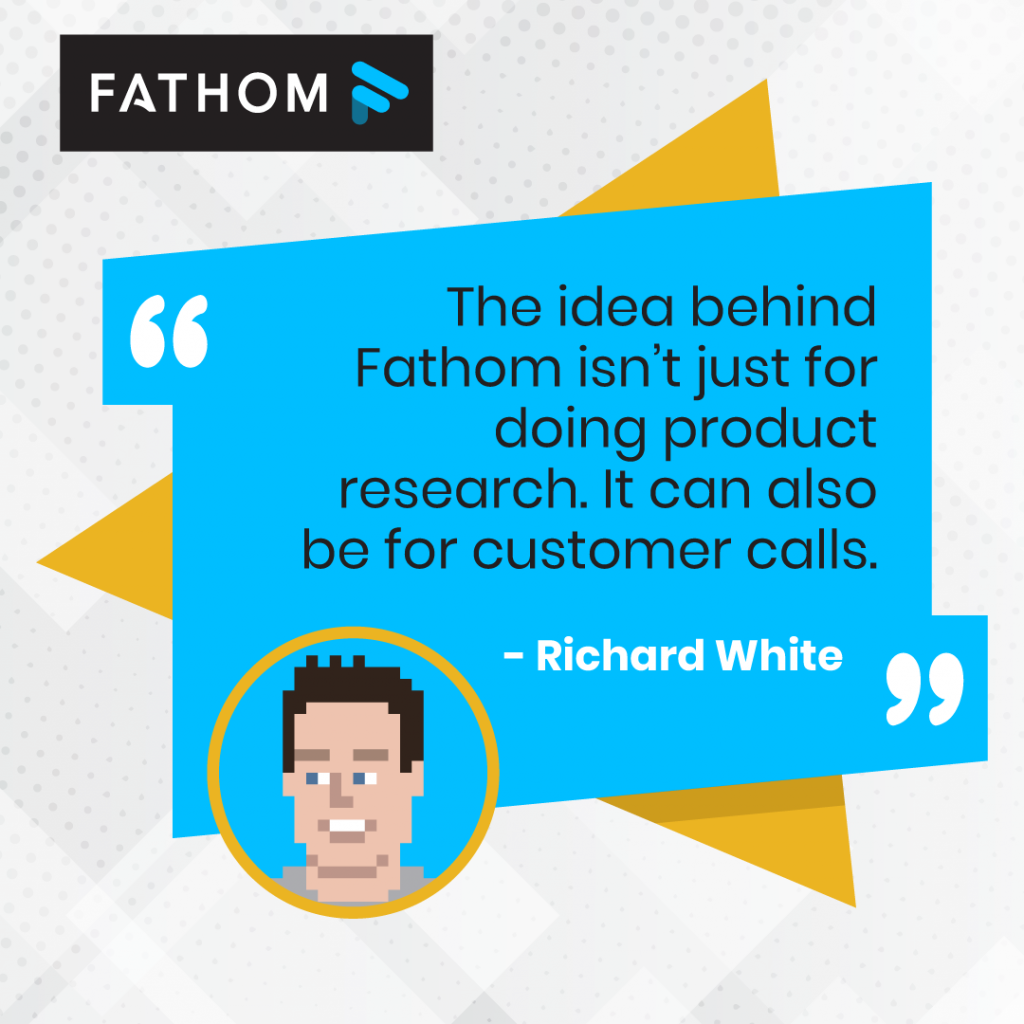 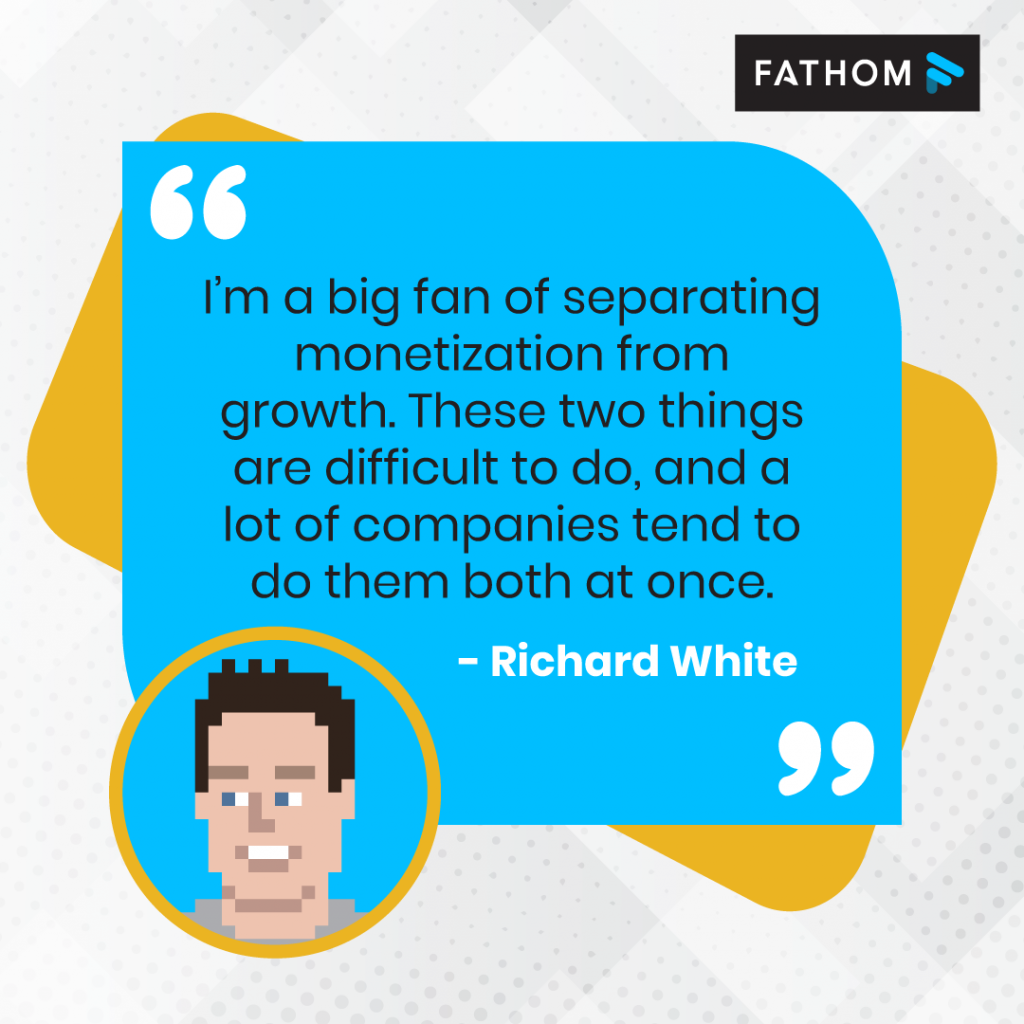 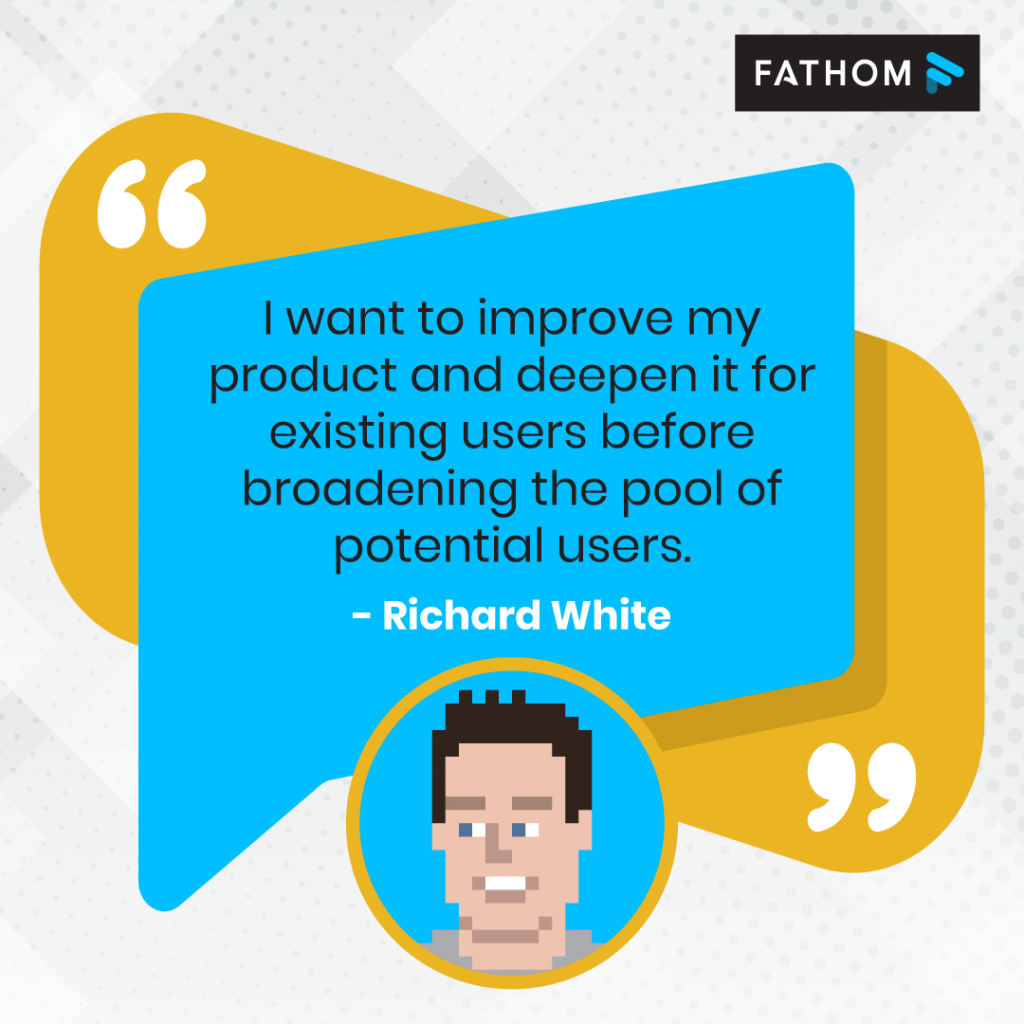 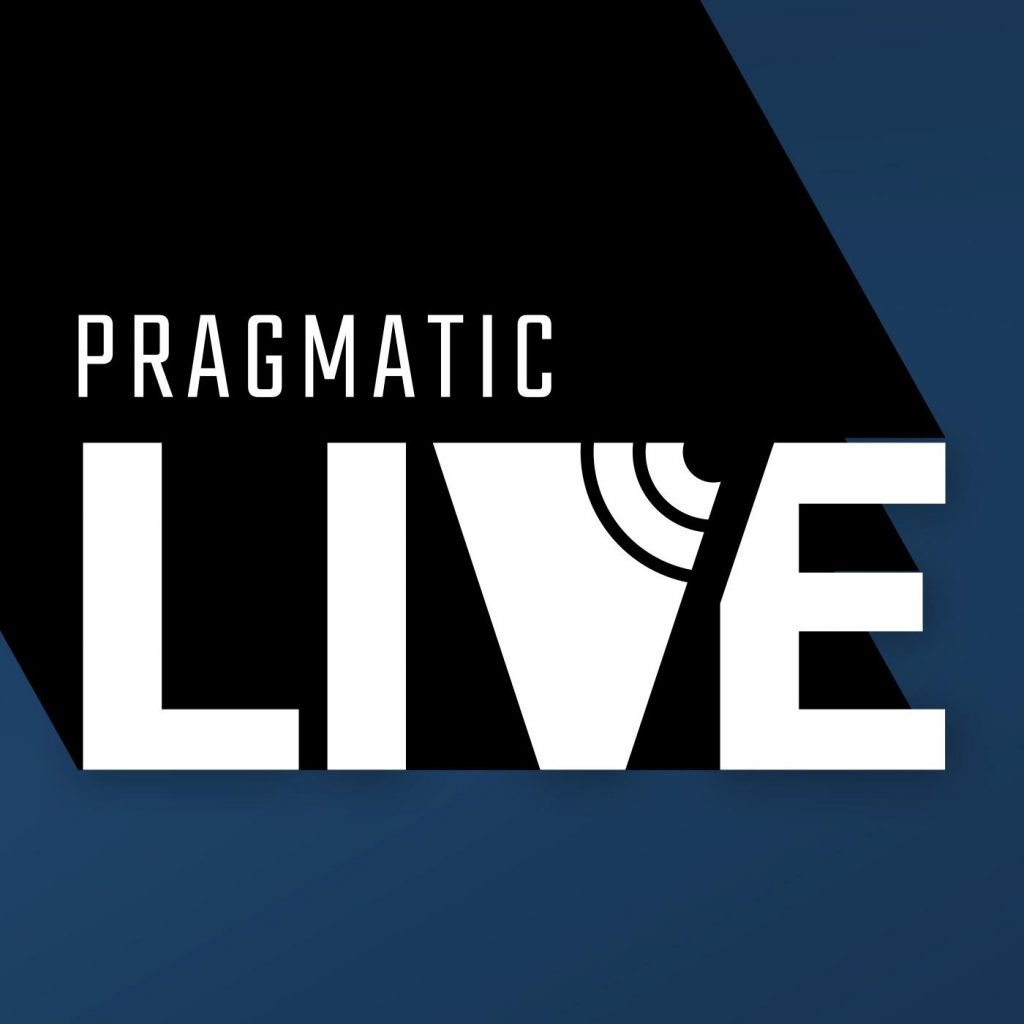 “The goal of Fathom is to help people perform user research more effectively and efficiently to capture insights during calls.” – Richard White

“One of the biggest challenges of sales teams is taking good notes during meetings. I knew this task could be easier to execute and that there was a bigger market for it.” – Richard White

“The idea behind Fathom isn’t just for doing product research. It can also be for customer calls.” – Richard White

“I’m a big fan of separating monetization from growth. These two things are difficult to do, and a lot of companies tend to do them both at once.” – Richard White

“Zoom has such a dominant market share right now. Although it can be compelling to expand, there’s so much I can do for the platform at this time.” – Richard White

“I want to improve my product and deepen it for existing users before broadening the pool of potential users.” – Richard White

“You only get one shot to make a good first impression. When people experience your product for the first time, it should already have a depth of functionality to it.” – Richard White

In this episode titled “How Fathom Video Validated a Market Problem and Built a Notetaking Solution,” Rebecca Kalogeris interviews Richard White, the founder and CEO of a Zoom app called Fathom.

White learned that capturing insights from market interviews was extremely time-consuming and came up with a product designed to resolve this issue – Fathom. With their Zoom app, users can record and highlight notes in real-time during meetings.

Rebecca Kalogeris: How did you and your team discover the problem of capturing insights from meetings and that it was an issue that needed to be solved? What pushed you to create the Zoom app Fathom?

Richard White: We actually started by doing a customer discovery on a different product idea. It so happened that what we were doing at that time had similarities to what Fathom is right now. We wanted to automate the scheduling of customer interviews, and I know how much of a pain point that can be.

So in the process of doing some interviews, I was asking one of my interviewees about the problem of scheduling. The person gave me a lot of details concerning scheduling. As I was talking to them, I realized that I actually spend an hour for every 30 minutes of recorded content analyzing and cleaning up my notes.

It was one of those things where I wasn’t looking for that problem originally until I thought about it and found that it was a bigger problem than scheduling itself. I started talking to my team about this issue, and they validated it and thought that we should look into it.

Rebecca Kalogeris: So, between the two problems of scheduling and taking down notes, how did you know which one was the bigger problem? What helped you weigh those two and decide on one over the other?

Richard White: As a person who used to run a sales team, one of the biggest challenges my team had was to get them to take good notes. Some people took really crappy notes, while others took overly verbose notes. Yet even when I had the best notes in front of me, I still ended up finding them lacking.

And so then I started thinking about it – “Oh my gosh, this actually could be an easier thing to do, and there might be a bigger market for this need.” But it’s not just for people doing product research on prospects – it can also be for customer and sales calls.

That was the progression of how we got started with the research behind Fathom. We also wanted to see if there were already other people in the space doing this. I needed to interview a bunch of customers to figure out if I was onto something or if I was just reinventing the wheel.

Rebecca Kalogeris is the Vice President of Marketing and Product Strategy at Pragmatic Institute. She has a proven record of helping companies deliver rapid revenue growth. Kalogeris is passionate about building teams, processes, and infrastructure to achieve organizational goals.

Richard White is the founder and CEO of Fathom, a Zoom application designed to help research and sales teams capture insights from meetings efficiently. He began his career as an engineer and product designer and worked for UserVoice, a platform for managing product feedback at scale.

To White, talking to prospects and customers while taking down notes and ensuring the data is understandable is a major problem for many meetings today. That’s why he created an app for Zoom that allows users to record and highlight important parts of a meeting so they can write notes later or skip the notetaking altogether.