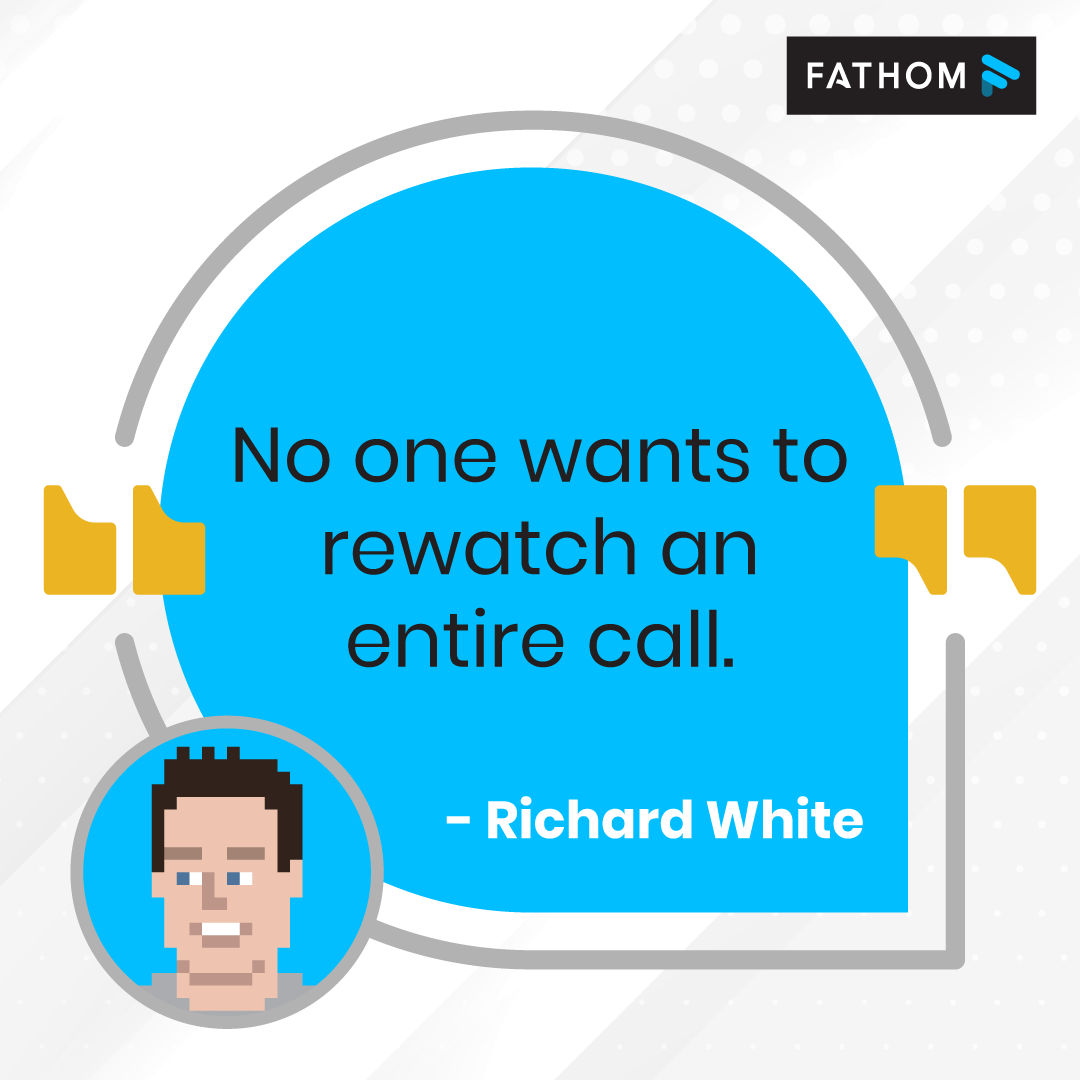 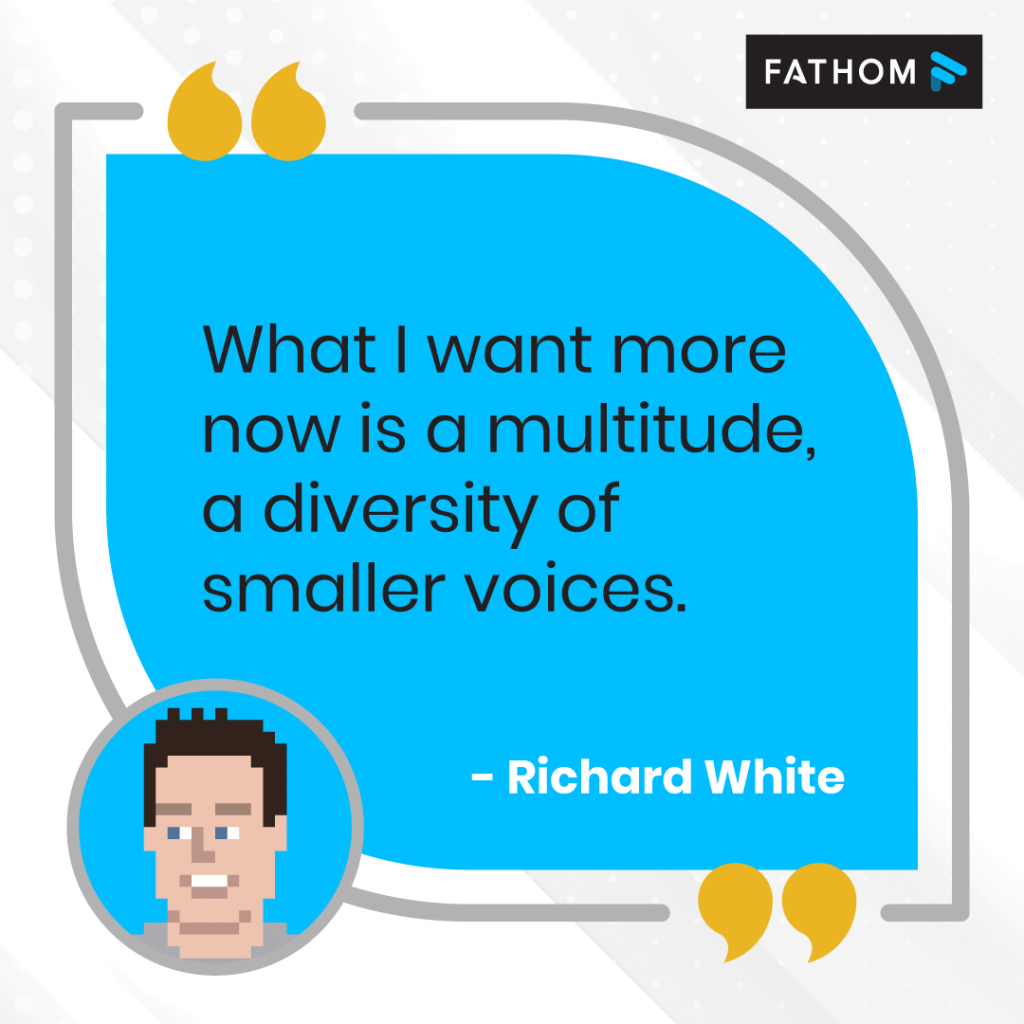 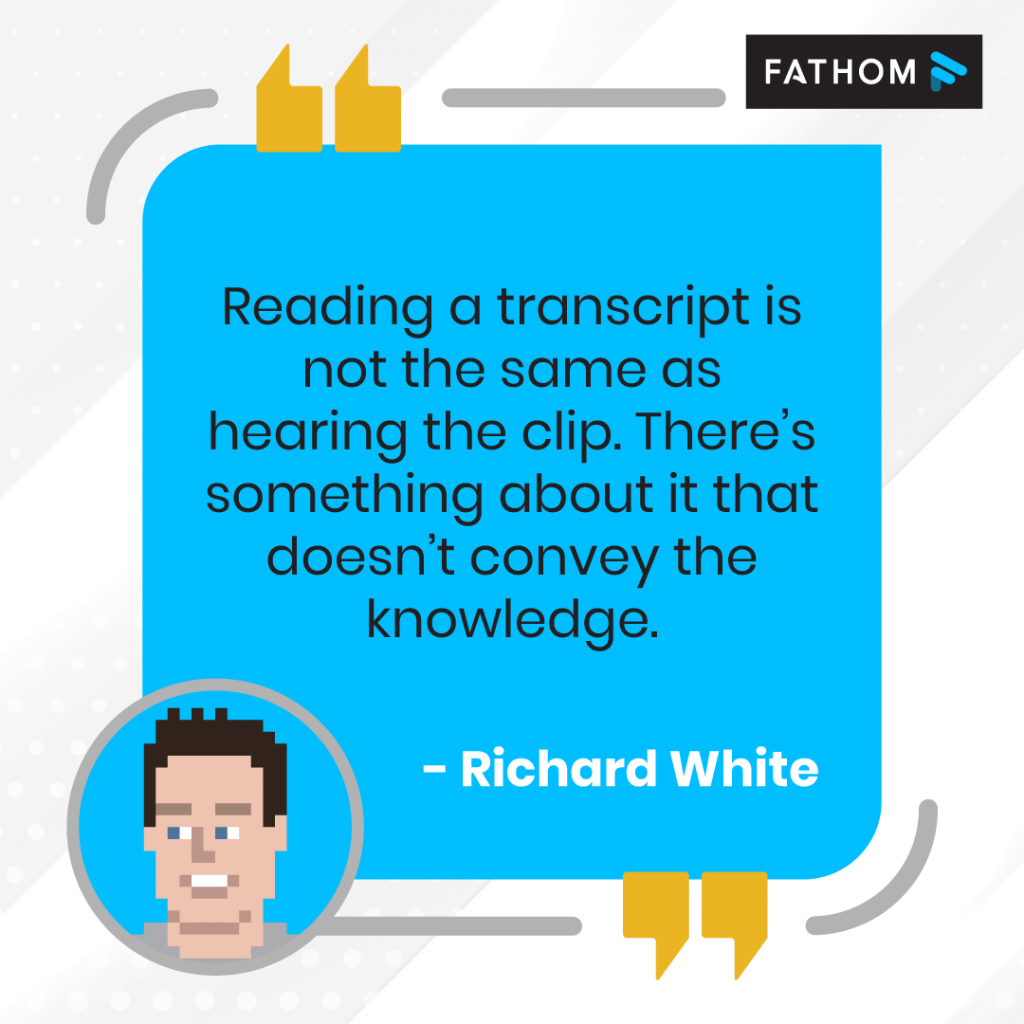 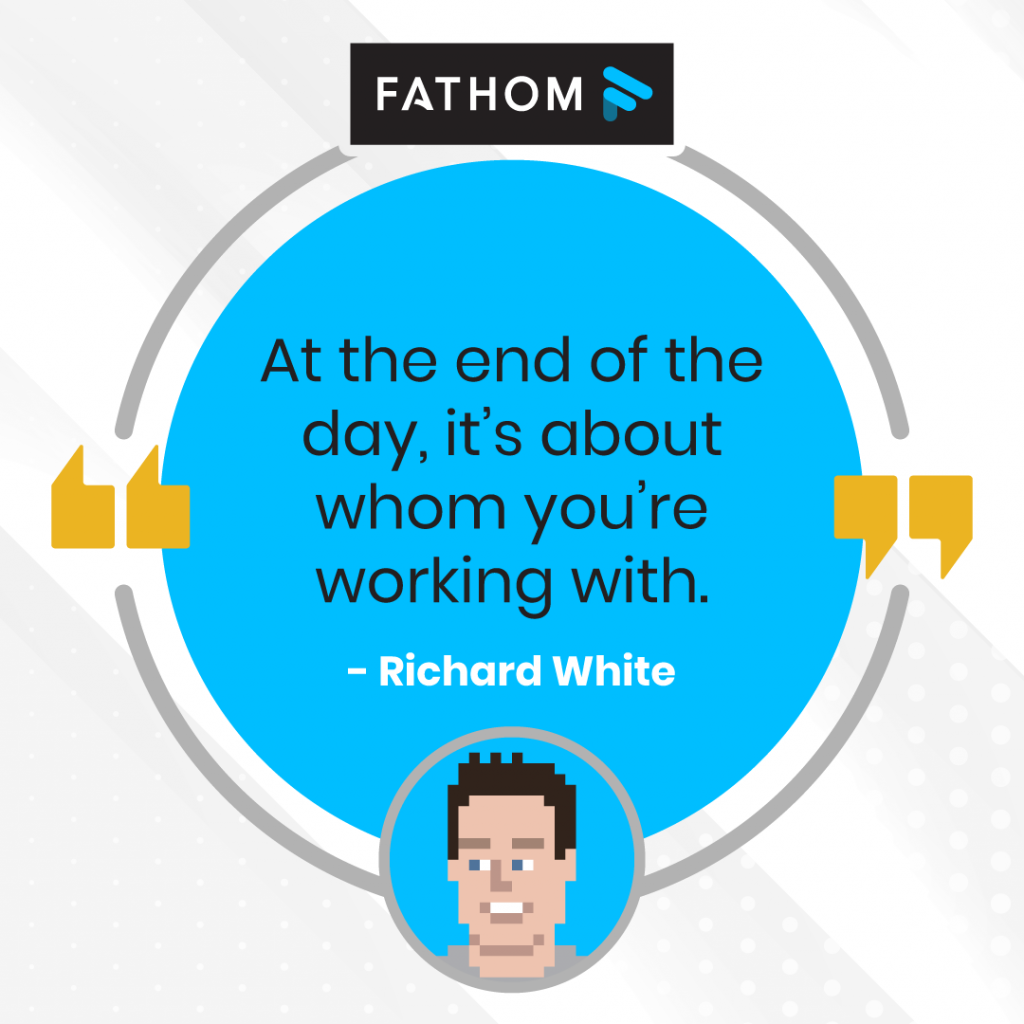 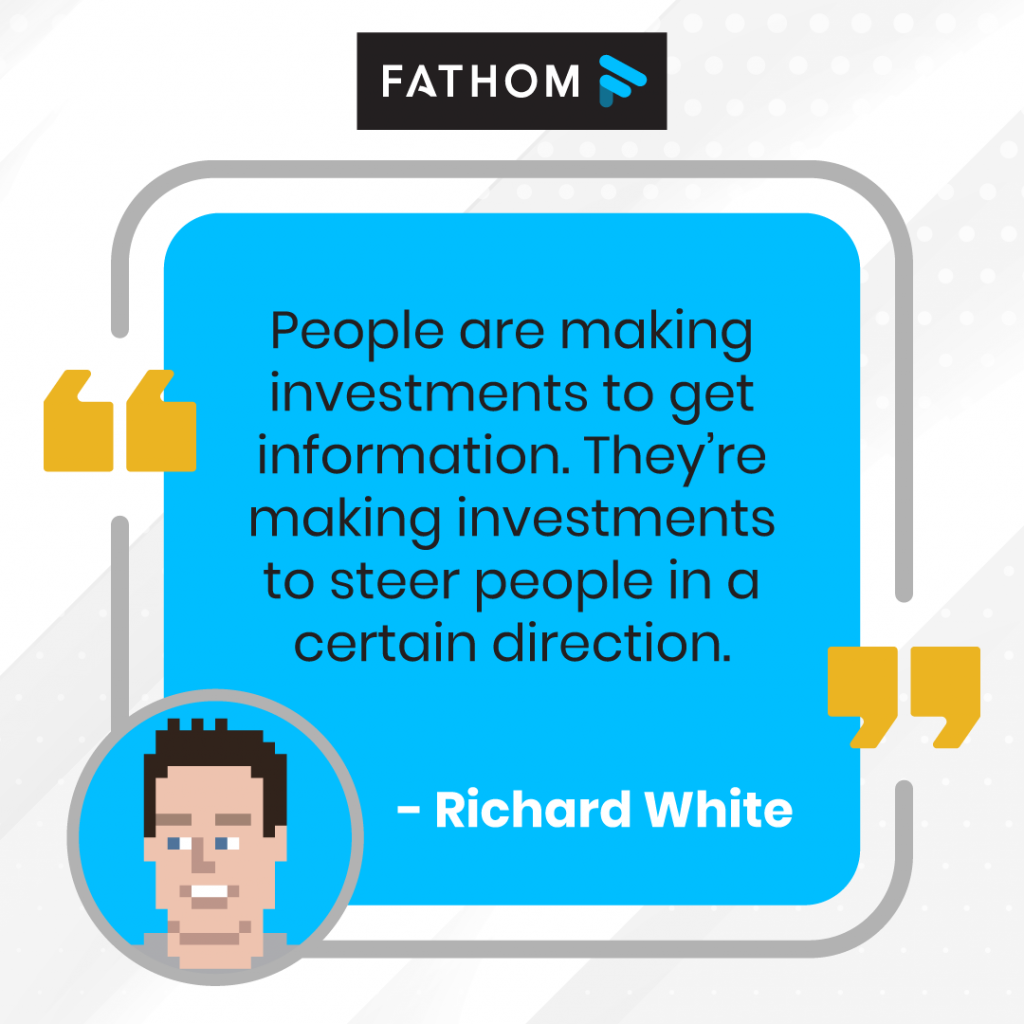 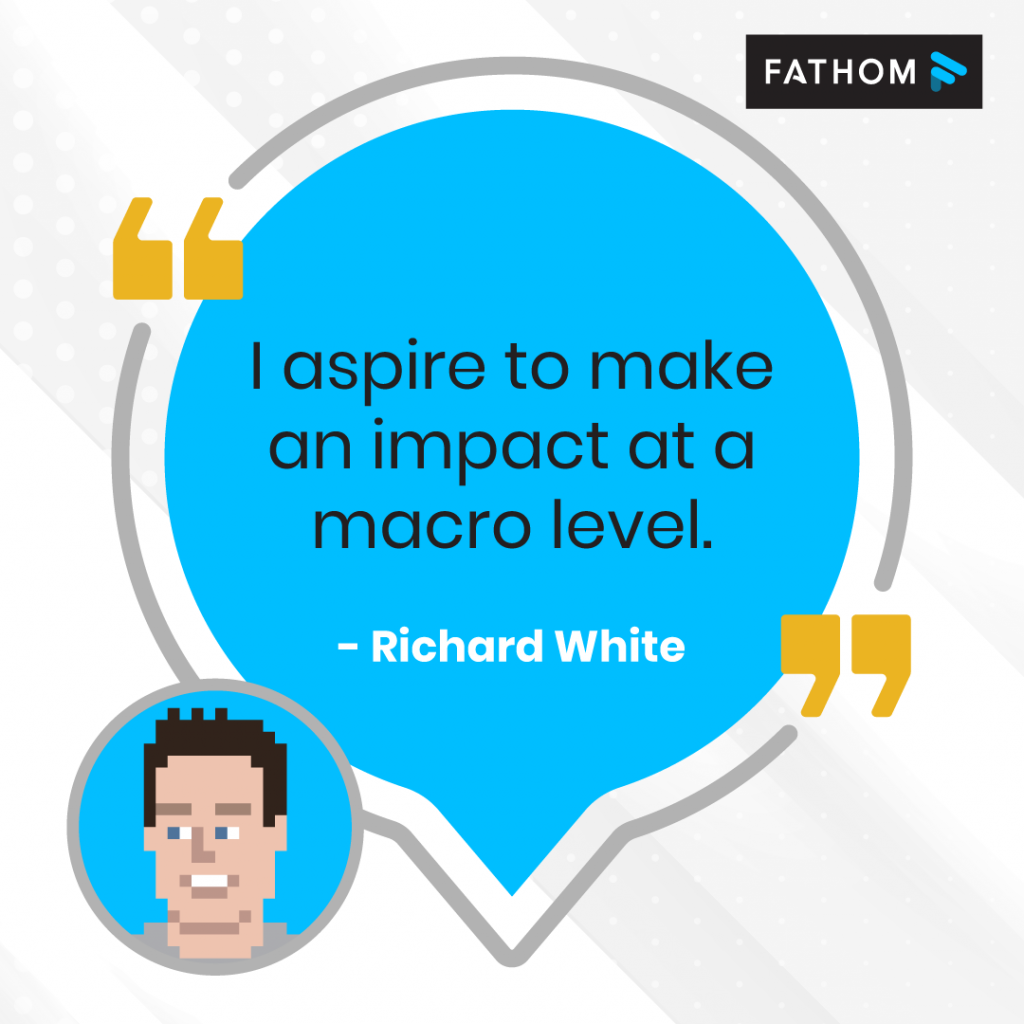 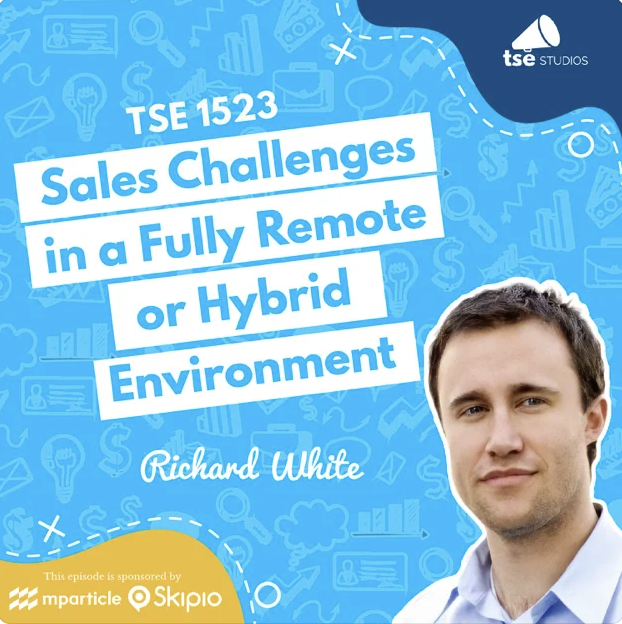 “No one wants to rewatch an entire call.” -Richard White

“What I want more now is a multitude, a diversity of smaller voices.” -Richard White

“Reading a transcript is not the same as hearing the clip. There’s something about it that doesn’t convey the knowledge.” -Richard White

“At the end of the day, it’s about whom you’re working with.” -Richard White

“I aspire to make an impact at a macro level.” -Richard White

In this episode of Startup Project, Nataraj explores Fathom.video with its CEO Richard White, as well as Rich’s history in the SaaS industry with UserVoice. Their discussion starts with how Richard saw promising prospects in the productivity space, how he secured a valuable investment from Zoom Apps Fund, and his plans with Fathom.video.

Nataraj: So, when you found this idea and were thinking about creating a new company, how did you estimate the opportunity here? Because if you look at just the productivity space today, there are so many products. So how’d you think that this could be a company on its own, or is it just a product or a feature. How did you make that call?

Richard White: That part was pretty easy because we thought that this could be bigger than just product research, like sales, customer success, maybe even recruiting. So I was very familiar with Chorus and Gong, which are the top two heavyweights in the sales coaching recording space. Chorus got bought, and Gong was raising multi-billion dollar valuations. And so my company trialed their product, and before we even got into this percentage, we interviewed 100 Gong and Chorus users and asked them, “what do you like, what do you not like?” Because I think this already exists. And I went and dug in and found that there are serious gaps or windows of opportunity, both product-wise, and what I can say is these guys are still relatively new. They’re now at multi-billion dollar valuations. And they’re only focused on sales. They’re only focused now on Midmark enterprise sales which are pretty expensive products. Later on, we got into Y Combinator, TAM analysis, and now there are 11 million sales and CS people in the US alone, and they charge them 25 bucks a month. But in the beginning, it was just simple as who would we be competing with? And how big are they? How well saturated are they? Like they’re still pretty early in their journey, but they’re already multi-billion dollar in valuation, and I think we can take them on, and we can do a much bigger market then. So back the envelope math, this could be a huge opportunity.

Nataraj: How are you thinking about more than just a product? And I felt that from here on, you can just start exploring and expanding the product portfolio to integrate into different sorts of things. How are you, in general, thinking about this? Because I think, to truly make a Zoom call productive now, you also have to think about the end-to-end workflow. From where are the users going to make themselves productive. So I would like to get a sense of where and how are you thinking about prioritizing and coming up with ideas in this direction?

Richard White: I think one of our core product tests from the beginning has been integration. Like, I think in this day and age, everyone has enough SaaS tools, right? No one wants to pick up something that doesn’t work with everything else they already have. And you’re right, that Zoom meetings are kind of like one of those gift boxes you get in the mail, a bunch of random stuff. There’s all this work afterward to like, get all these things to the right places. That’s another place where we looked at what existing solutions were doing. And they were just like, “Here’s your recording in a box, and you’ve got to still do all the work to get it that last mile.” And we saw that early on. That we built everything but these integrations. And then, we built up the CRM integration that would automatically log your call and auto-generate the call summary. Put your task in your CRM, and this is amazing, right? You got to think about this thing more longitudinally. Like, what is done for my user? So we probably spend a third of our time on core tech. Right now, we spend about a third of our time on onboarding; we spend a third of our time on integrations.

Nataraj works at the Product & Engineering Department of Microsoft Azure. He is also a Fellow of the On Deck Fellowship, which is a community of technology entrepreneurs that discusses the next step to take as a community. He is a founding partner of Plan B and the creator and co-host of the Startup Project, a podcast that explores the ideas and strategies behind tech startups and venture capital.

Richard White is the founder and current CEO of the tech startup Fathom.video, a free app that helps you focus on your conversations more by taking care of the recording, highlighting, and transcription of all your calls. He is also the founder and Chairman of UserVoice, the pioneer of the technology behind many of the Internet’s feedback tabs.