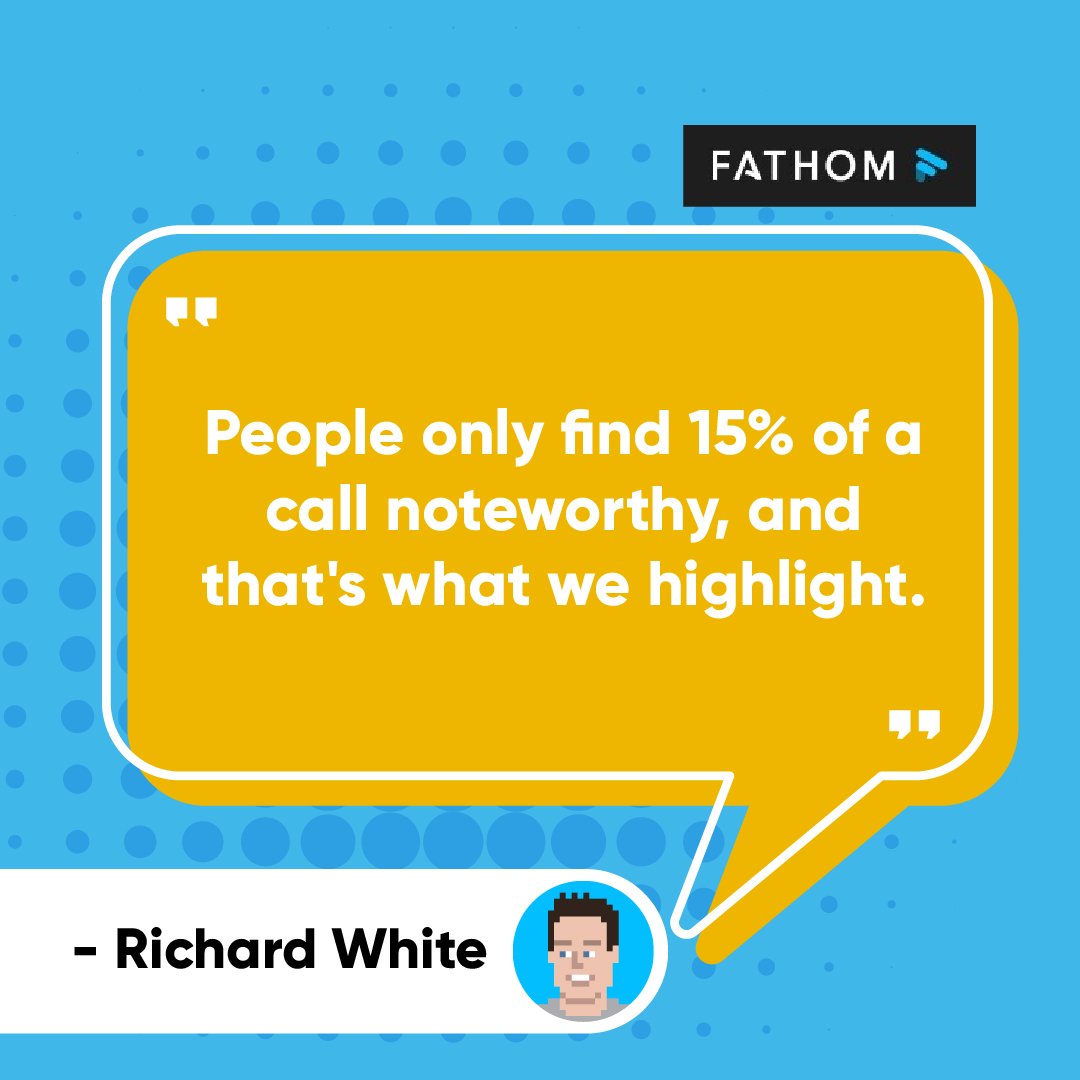 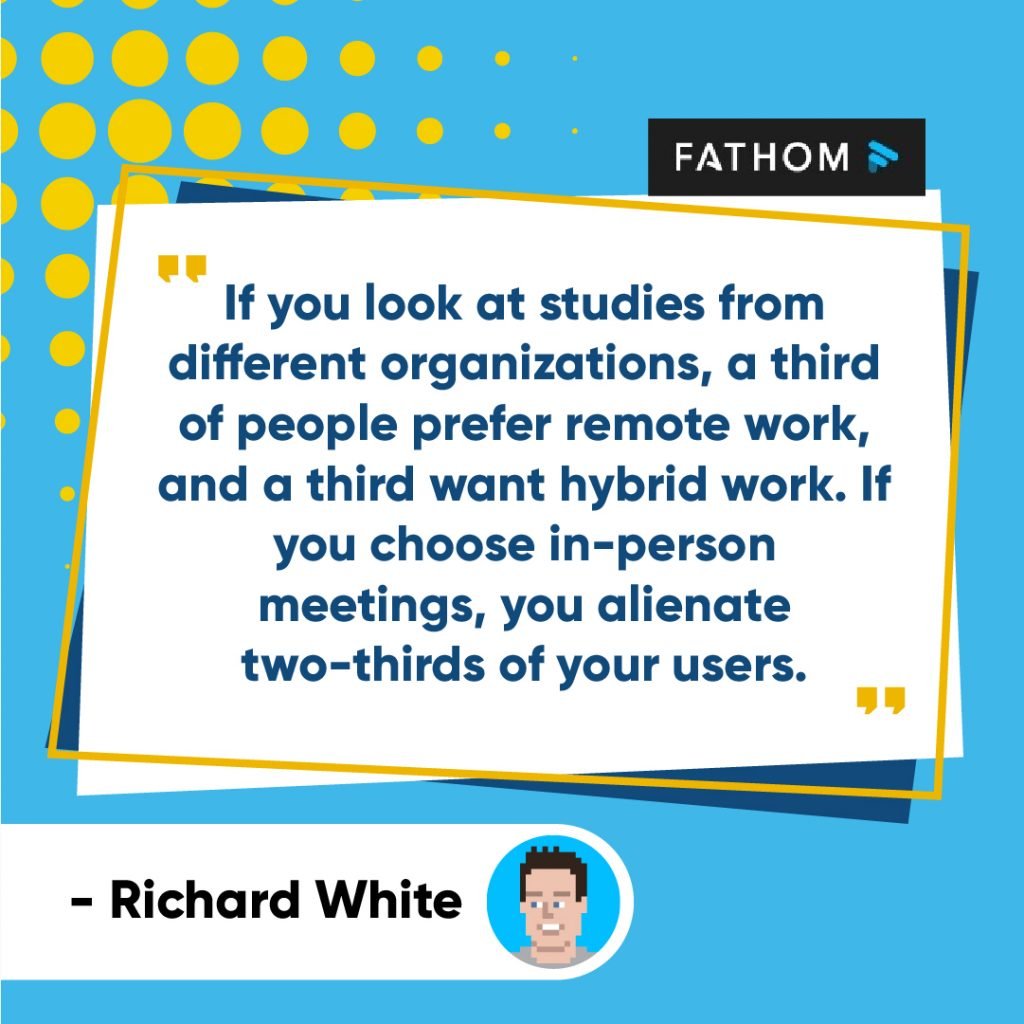 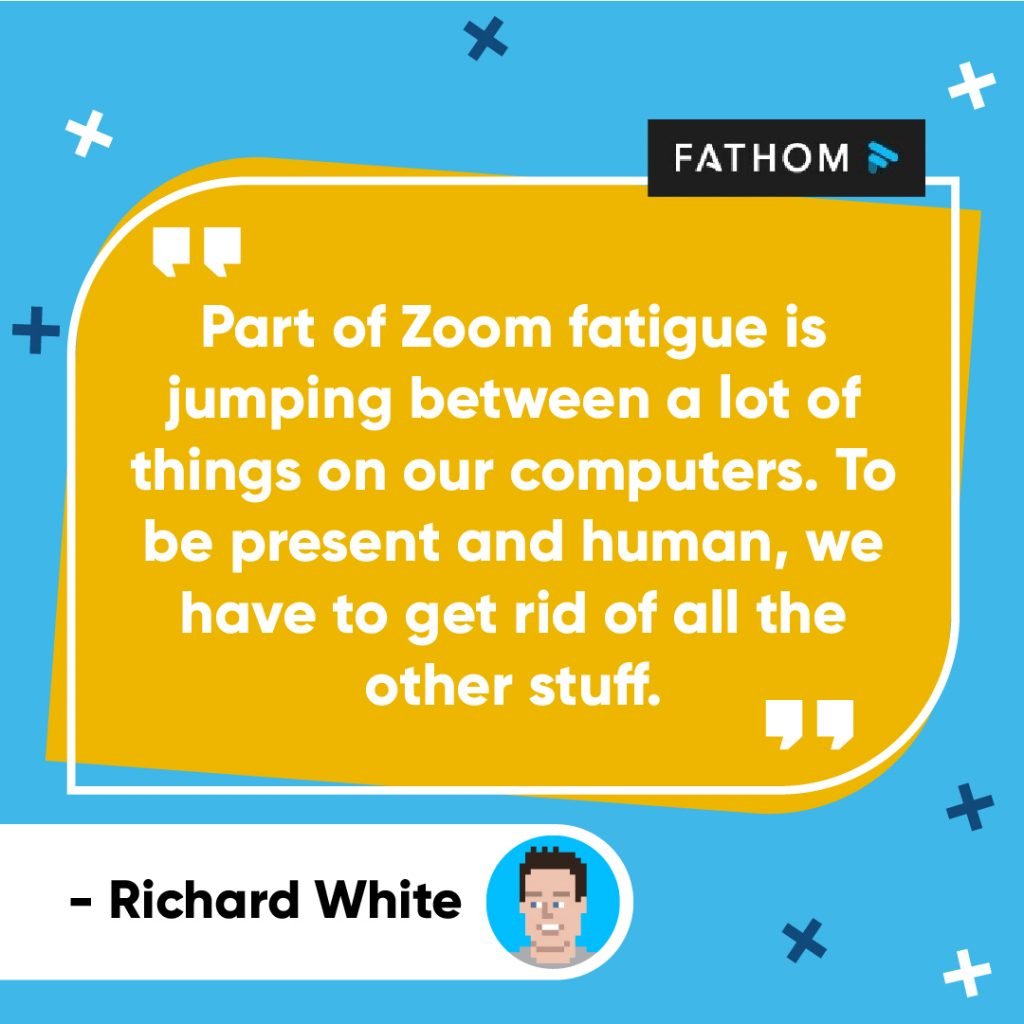 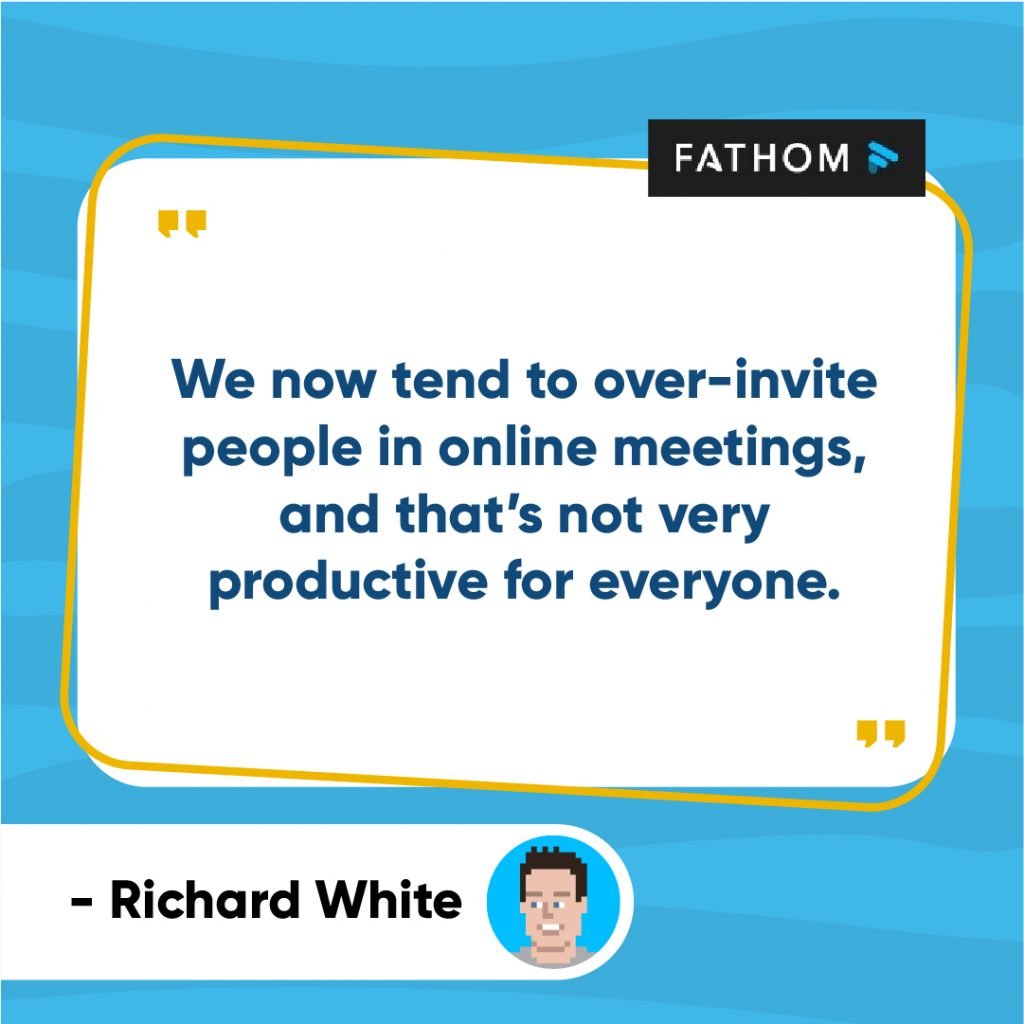 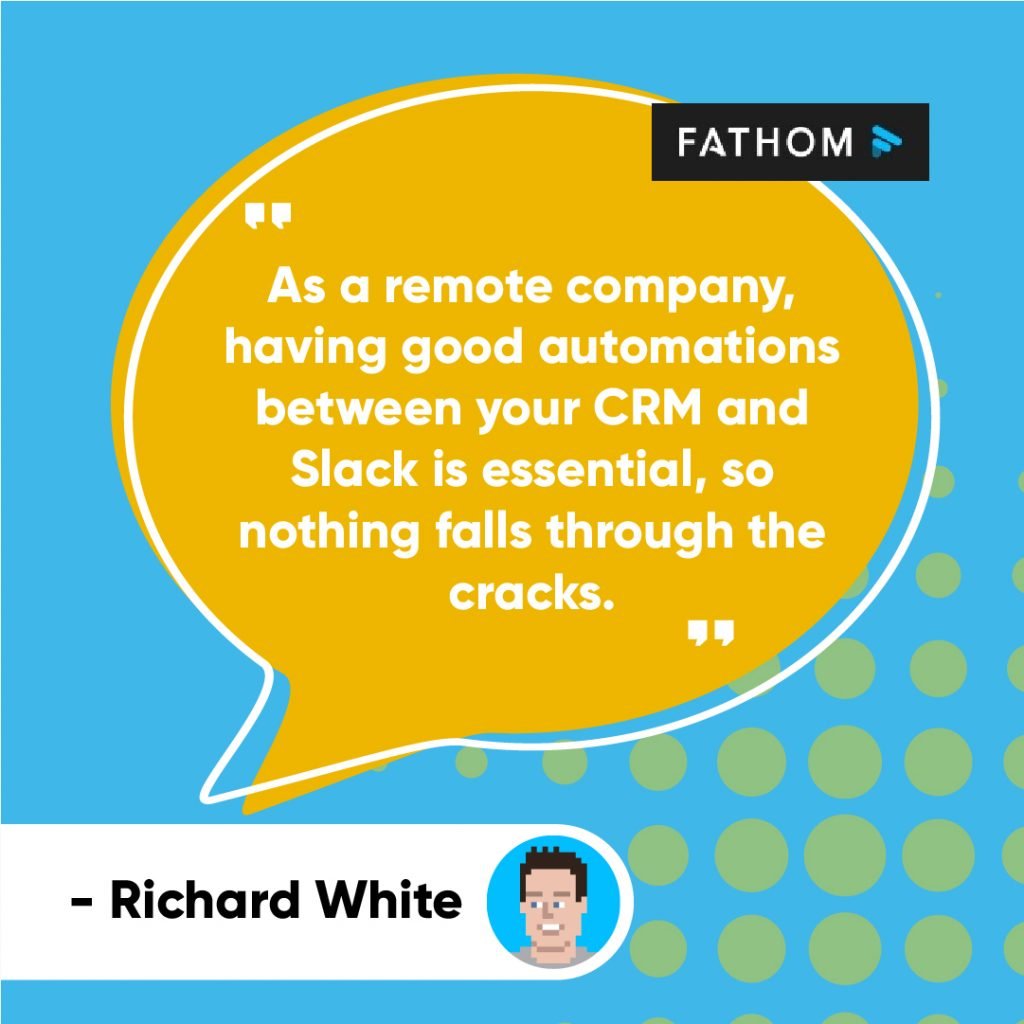 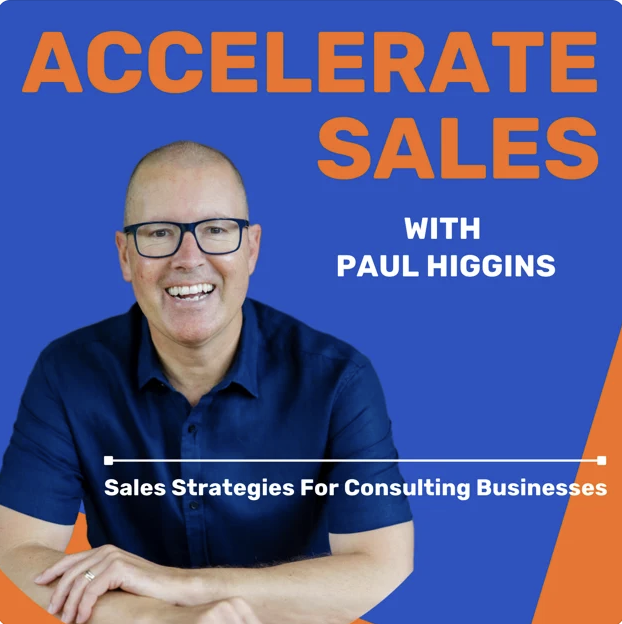 “People only find 15% of a call noteworthy, and that’s what we highlight.” – Richard White

“If you look at studies from different organizations, a third of people prefer remote work, and a third want hybrid work. If you choose in-person meetings, you alienate two-thirds of your users.” – Richard White

“Part of Zoom fatigue is jumping between a lot of things on our computers. To be present and human, we have to get rid of all the other stuff.” – Richard White

“We now tend to over-invite people in online meetings, and that’s not very productive for everyone.” – Richard White

“As a remote company, having good automations between your CRM and Slack is essential, so nothing falls through the cracks.” – Richard White

In this episode of the podcast “Accelerate Sales with Paul Higgins,” Paul speaks with Richard White, founder and creator of Fathom. Fathom is a tool that helps you generate video notes in your sales calls. The goal of Fathom is to make it so you’ll never have to take notes manually ever again in your Zoom calls. Fathom will help you recall, highlight, and share important moments from your meetings and will even send those highlights to your CRM or Slack workspace automatically.

Paul Higgins: What are some of the problems that small to midsize businesses face that you help solve?

Richard White: The reason why I started this company is I did 300 Zoom calls in January of last year (2020). I was doing a ton of stuff in my last company, I was like, “This is an insane amount of work to try to talk to someone and type at the same time, and then try to clean that up after the call.” I found that I didn’t remember the important nuances of it. And when I tried to share these notes, my team says “It just doesn’t translate.” The insights and the ups and downs just didn’t translate into textual notes.

Fathom was made so that you can focus on the conversation and not be stressed out, like, “Oh my gosh, what did I just miss? What did they just say?” You won’t have to because you’ve got a tool backing you up.

I used to run the sales team on my last company for a bit. That was probably the biggest challenge. I had management sales teams getting them to write me good notes. Someone wrote like chicken scratch, some of them wrote like a transcript.

But regardless of how good or bad they were, I still always was just wishing I could watch a 30-second playback of a certain part of the meeting. Fathom just de-stresses your day allows you to write better notes after the call is over since you can come back to it, and we automate a lot of the data entry into your CRM. On the manager side, it prevents us from having to view the whole meeting again, because we don’t have time.

I don’t know about you, but I’ve never had time to watch all my reps calls. But give me the highlights, let me take a 30-minute call and make it 90 seconds. Let me watch that and say “Ah, okay, I feel like I’ve got a grasp of what’s going on.”

Paul Higgins: What are some examples of how Fathom helps people close more sales?

Richard White: I think the biggest think I’ve seen is that if people have follow-up calls a week later, how good are you at picking up where you left off if you’re just reading your notes?

And so I think the ability to generate notes, to me, it’s like Netflix sending DVDs. Here’s a 90-second highlight reel of this call in for the rep, which jogs my memory. And I’m like, “I remember this call exactly. Let’s pick up right where we left off.”  It’s less back and forth, right? Also, it helps my manager coach me because I can show them, “Hey, what do you think about what they said here.” So a lot of what we do is really just help with time compression, and help you really maximize the time you’re on the call.

I will say one feature that people are starting to use that I’m really excited about is so we do everything in real-time recording and transcription. One of the things you can do is we can send a clip of a video call to a Slack channel while the call is happening. And we get like technical questions that someone on your team knows the answer to, and two minutes later, there’s an SE jumping on the call being like, “I see your question. It’s a great question,” and then they can answer it. It’s like a magical kind of collaborative time compression, and that stuff is what we’re really excited about.

Richard White is the founder and CEO of Fathom, a free app that records, transcribes & highlights your calls so you can focus on the conversation instead of taking notes.

Fathom was a part of the Y-Combinator W21 batch, is one of only 50 Zoom App Launch Partners, and is one of a small handful of companies Zoom has invested in directly via their Zoom Apps Fund.

Prior to Fathom, Richard founded UserVoice, one of the leading platforms that technology companies, from startups to the Fortune 500, use for managing customer feedback and making strategic product decisions. UserVoice was notable for being the company that originally invented the Feedback tabs shown on the side of millions of websites around the world today.

Richard previously worked on Kiko, a company in the first batch of Y-Combinator, with Justin Kan and Emmett Shear who subsequently went on to found Twitch. Richard is passionate about designing intuitive productivity tools to create delightful user experiences.