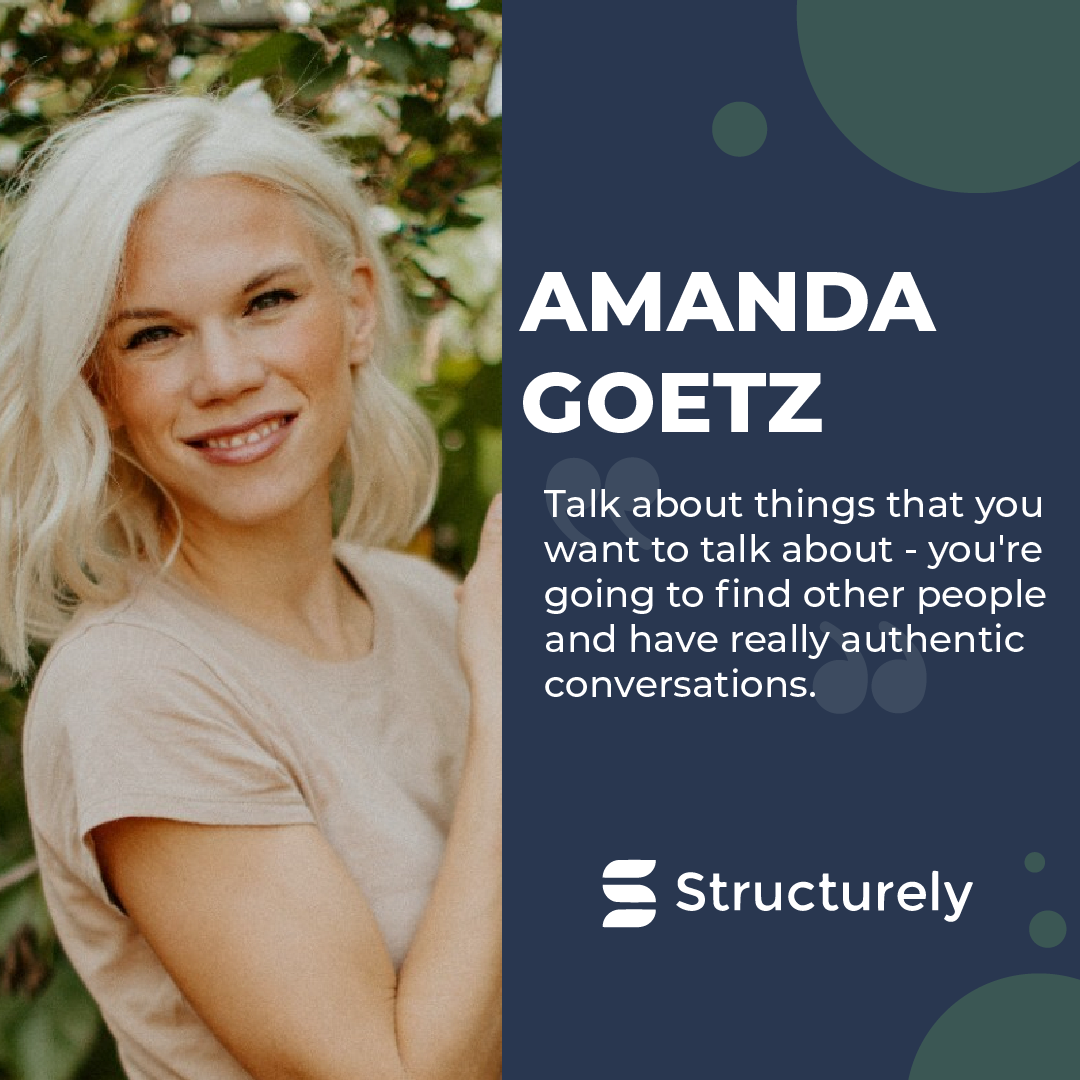 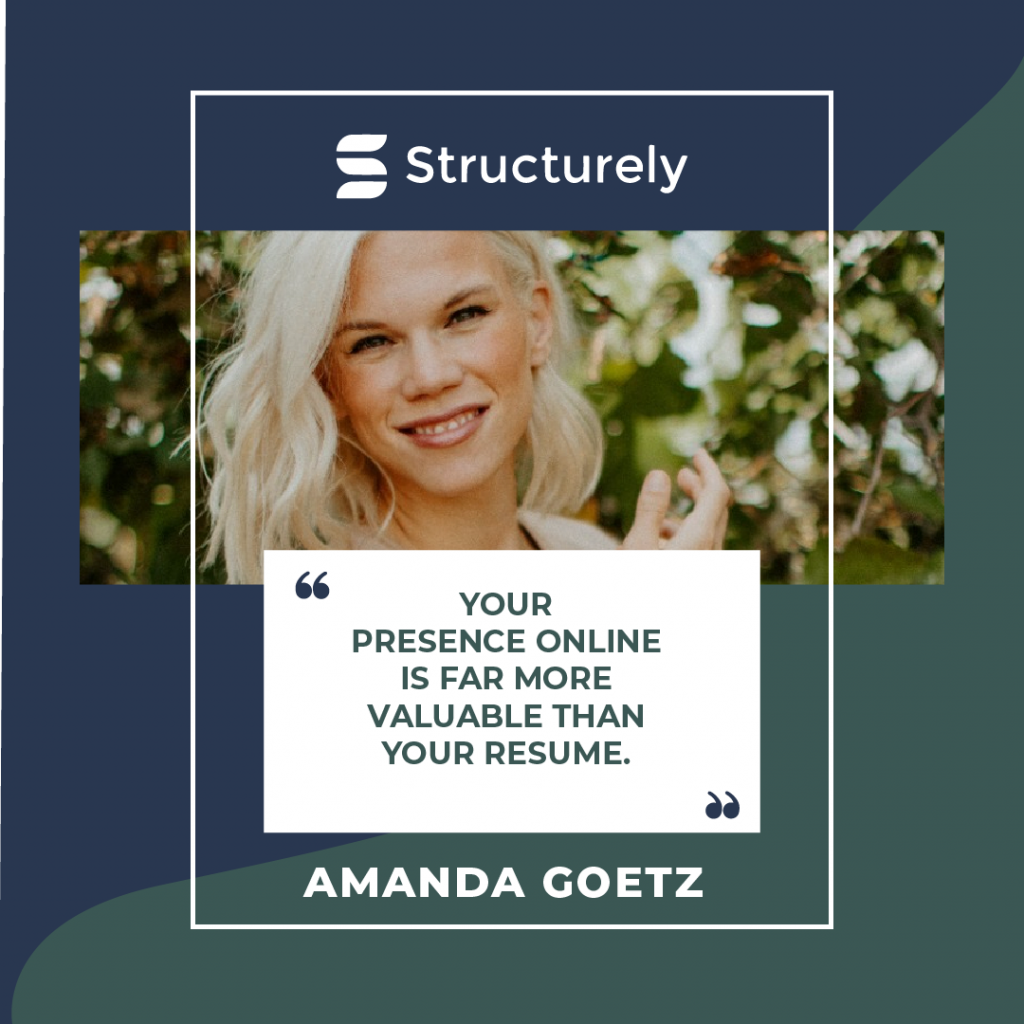 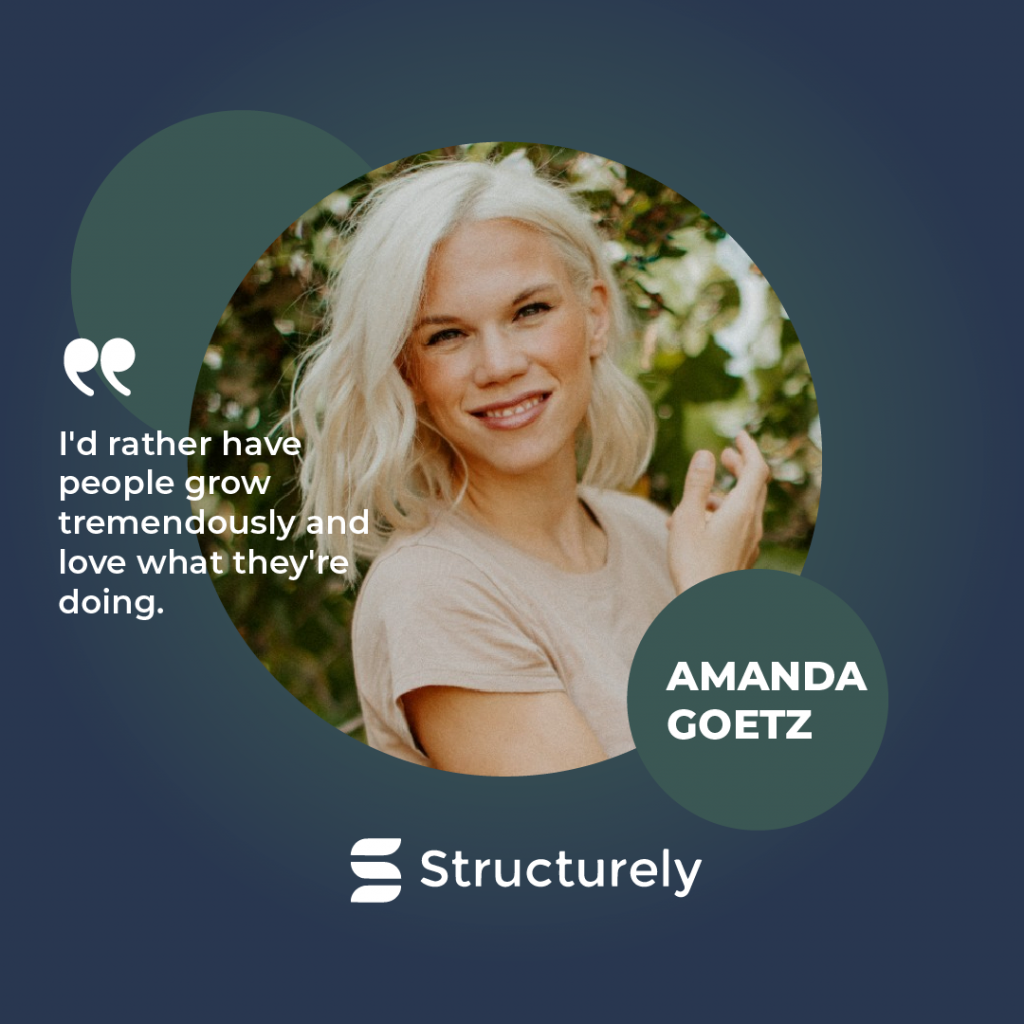 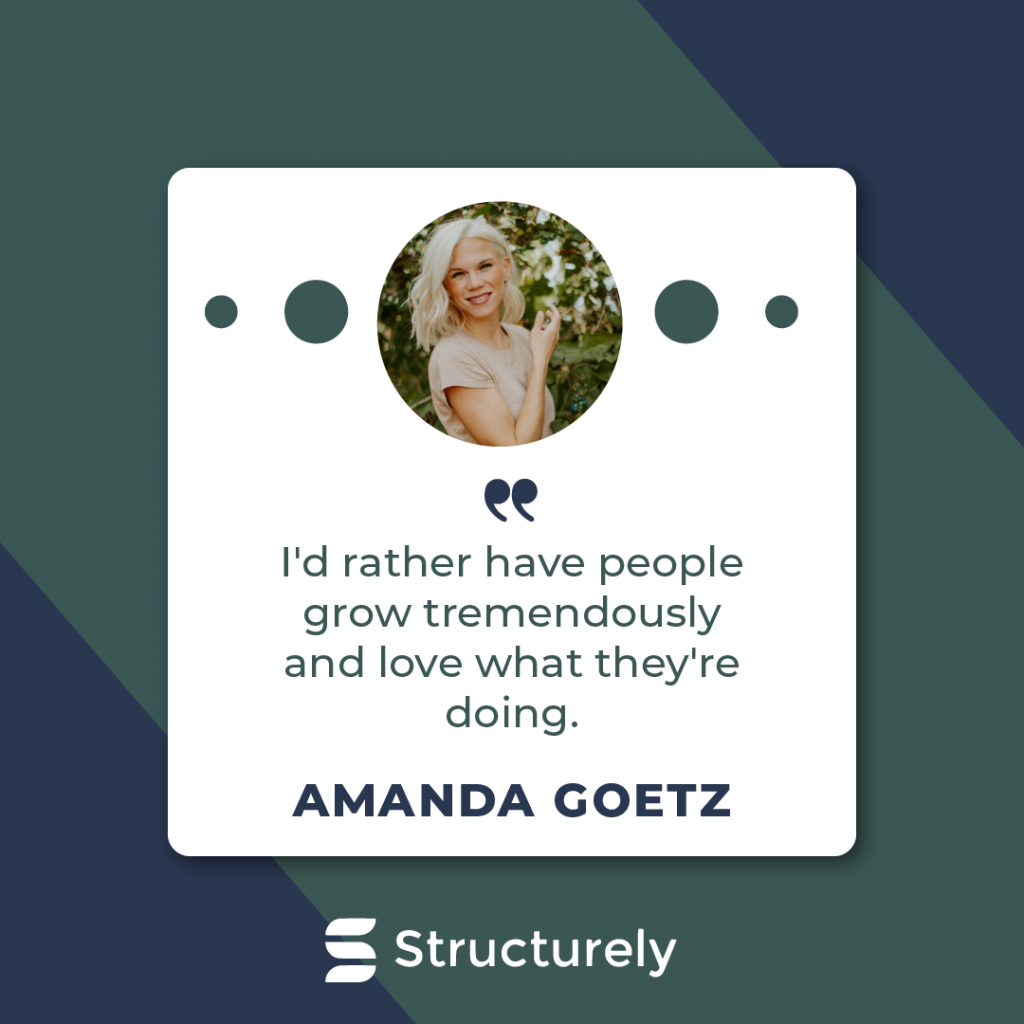 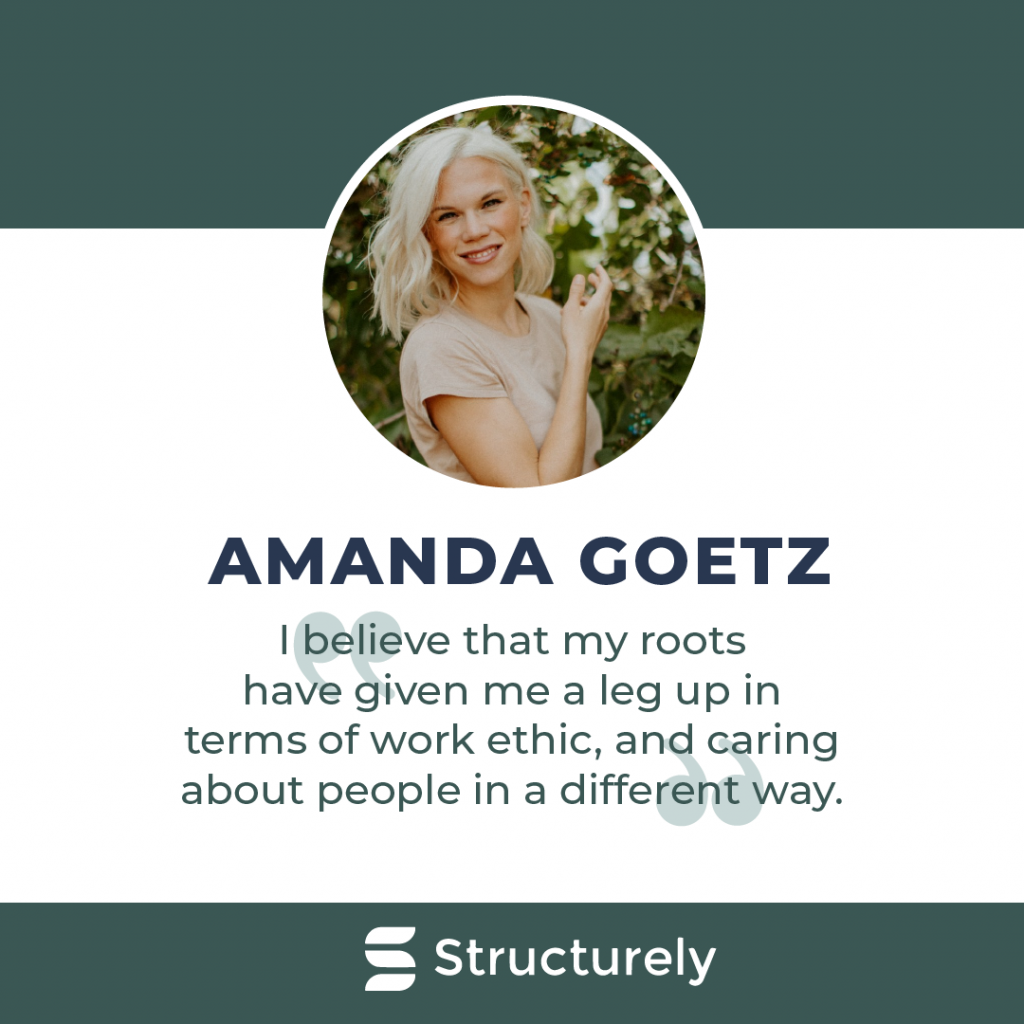 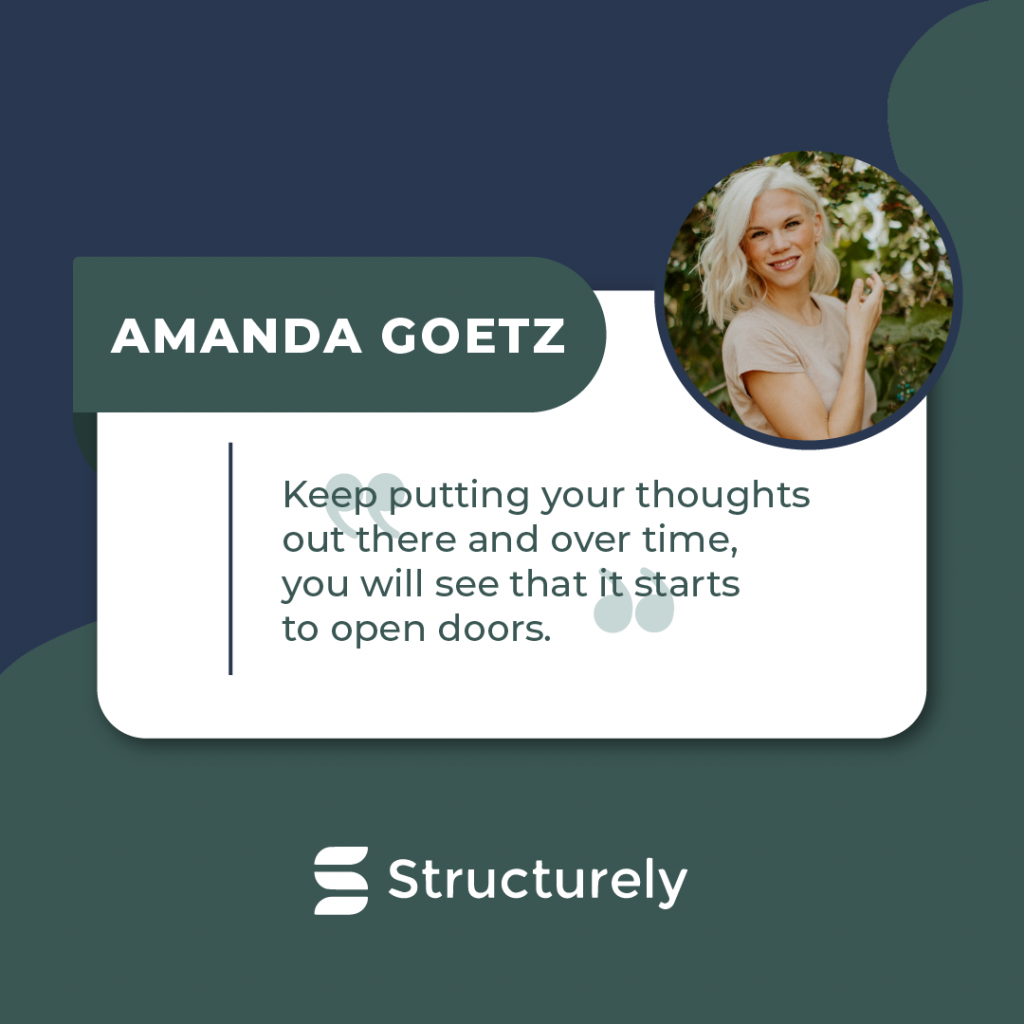 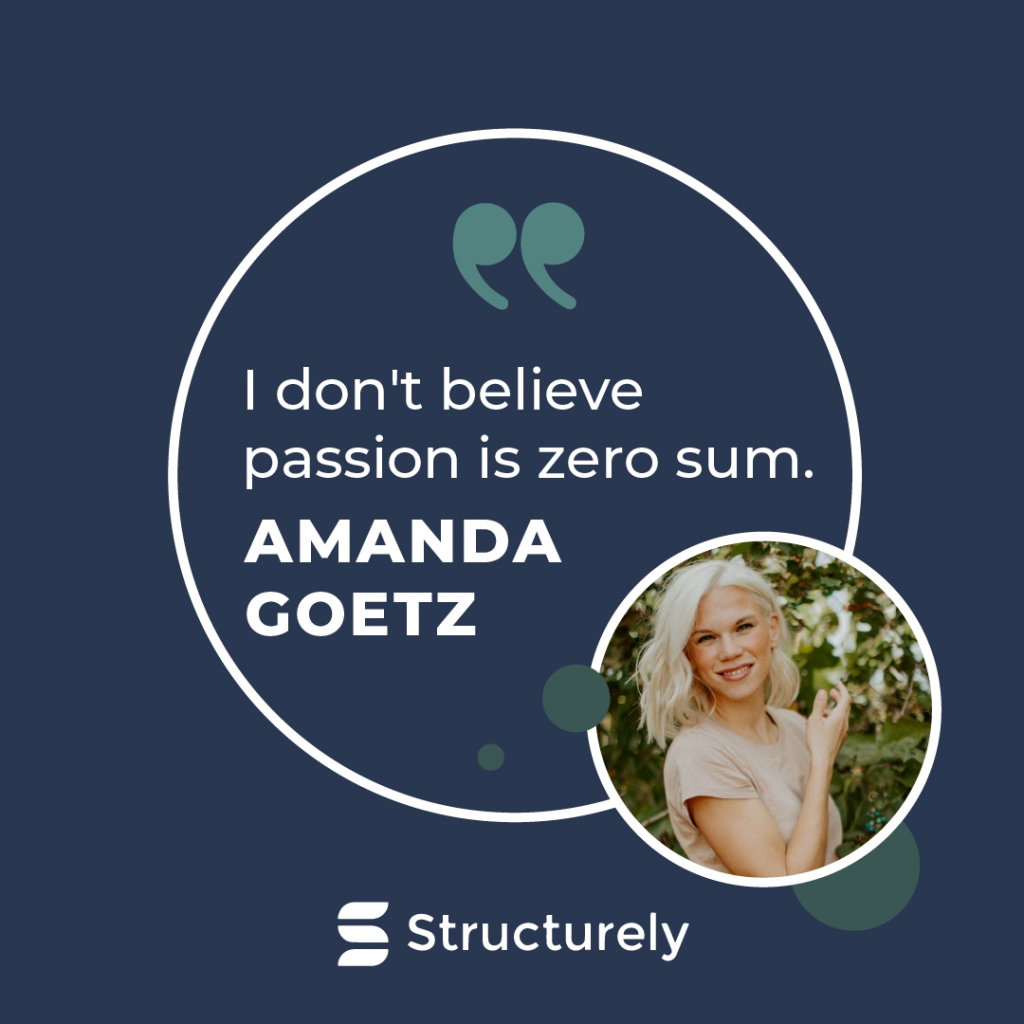 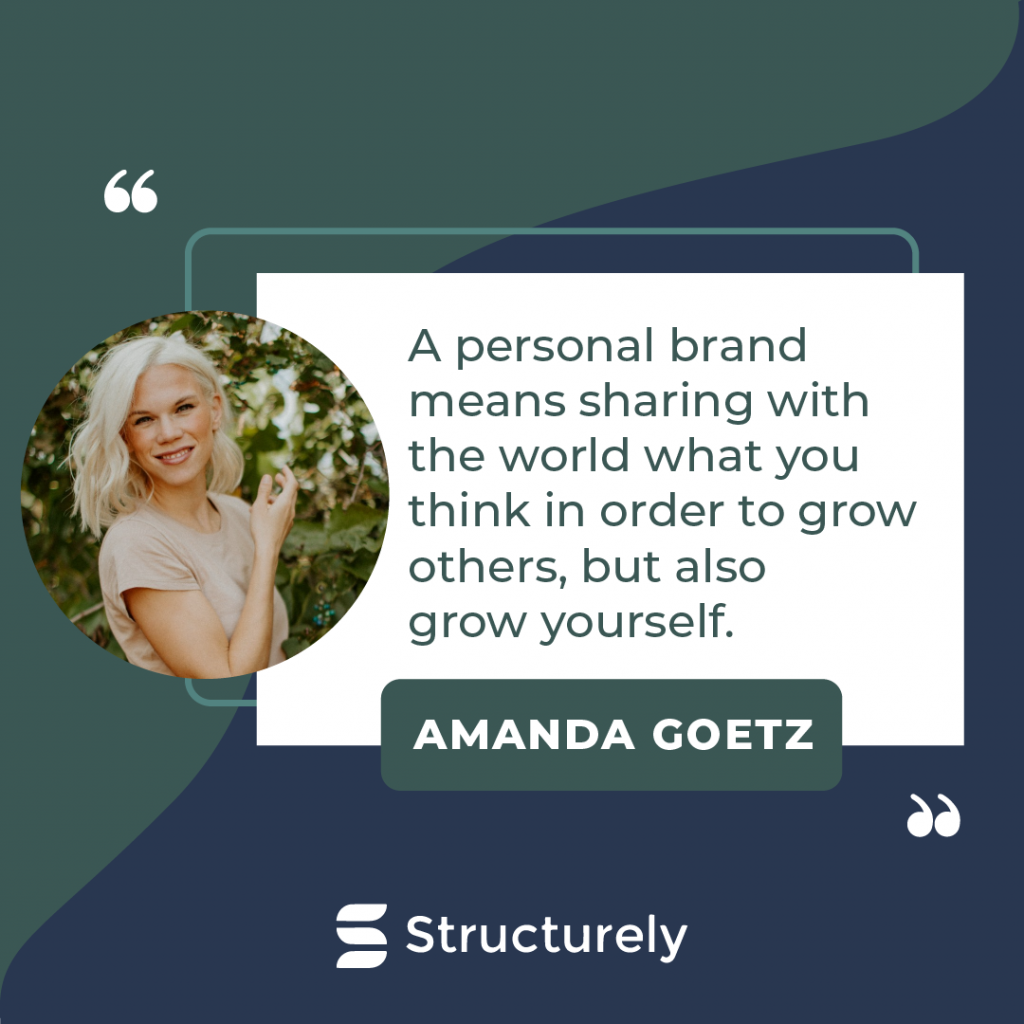 Amanda Goetz is interviewed by Pete Jones on the Structurely channel and talks about building a personal brand. In the current age when social media may propel one’s career prospects in unforeseen ways, it is essential to remember that one’s presence online is worthy of maintaining; one’s voice is worthy of being listened to. By telling her story of how she adapted to and ultimately was empowered by having an online presence, Goetz offers advice to young professionals to have a sense of agency over themselves, their brand, and their future.

I know there’s a backstory for you as far as how you started developing a personal brand. Would you mind giving us a little bit of a glimpse as to what happened? What kickstarted what you are on social media today?

So the funny story is, I’ve only been on Twitter for about a year. I mean, I joined like seven years ago, but maybe I tweeted once every two years when I spoke at something. I would like share the link or whatever; it was not active. I was talking with a founder friend- we were debating for many weeks about Twitter- and I viewed it as a male echo chamber at the time. Partly because I only followed VCs. We debated a lot about the role of Twitter, and I was like, “fine, I need to grow and see for myself,” rather than just having a very one-sided argument because I hadn’t put in the effort.  So I agreed to a one-year commitment test to go on to Twitter and to tweet like four to five times a day. He would always just be like, “what you just said, if you put that on Twitter, you’d be able to have a great conversation with really smart people.” So I started to just tweet my ideas and share what I was dealing with as the Head of Brand at a company, and also just what I was dealing with personally. I think for six months, I was tweeting to no one or maybe like the same like four to five people. Then over time, I actually started to get a following, and you know, two weeks ago, I got verified! So it’s just been crazy. It’s been a wild year. There was this massive conference that I wanted to speak out about because it was about female empowerment… something I’m very passionate about as a single mom. I remember getting the response back via email from them saying we’d love to have you but you just don’t have a large social presence. I’m like, “so they know I’m qualified to speak on this topic, but because I don’t have enough followers, I couldn’t do it?” So I remember tweeting that out just being like “When did follower count replace credibility, especially in a world where you can buy followers?” I remember I was in India with my team and all of a sudden I went from like having less than 1000 followers to like 5000 followers. It was nuts because people were like, “Let’s help you let’s let’s get you followers.” So it was it’s been a crazy experience. But to answer your question about opening doors, it really has been an incredible opportunity.  I will say like if Alex is listening- he’s the founder of Lolly- he was right. Twitter is definitely more than just a male echo chamber.

So as a leader, how have you empowered your team or helped them kickstart their own personal brand?

So I’m in this really awesome spot where I’m in middle management. So I get tof help remind the executive team why this is important. I’m kind of that bridge. I’m not young enough to be considered part of her like Gen Z, younger millennials, but I still think I’m a millennial. So, I think that one of the things is just reminding our executive team and the other leaders in this space what the value of this is. The way I kind of think about it is: I’d rather have people grow tremendously [and] love what they’re doing. I don’t believe passion is zero-sum. I think that you can have multiple passions at once. Like, when I had my third kid, I didn’t love them any less than my first and second. So I believe that, if we cultivate our employees to be so excited every day about all the things that they’re doing in life, and see them as whole people- yes, they’re going to leave the nest at some point- I’d rather have them leave the nest with so much gratitude than resentment because we stifled their opportunities and their growth. That is a very clear delineation between some leaders and how they think. Sometimes leaders view their employees as people they own, like “we own your time, you tweeting during the day? That’s on company time!” It’s a very archaic way of thinking. The nine to five was created when we had factories; optimizing for people’s interests and passions and working styles is more important. I think leading by example, is really important. As a leader who needs to influence maybe an older demographic who may not think the same way, it’s really important to just be like, “I’m going to do it.” The same goes for work-life balance. I am a single mom with three kids. So if I need to leave at 430 because I hadn’t seen my kids for two days, I do that, and I say it very publicly so that people know that this is okay. You’re paving that path. It’s the same with personal branding, I tweet all the time now and I use it as leverage. I talk about The Knot, I talk about, building the company, all the things, and it makes other people feel like it’s okay. Because if I’m doing it, and I’m a leader, it must be okay. Right?

Host / Podcast Bio: Pete Jones is the Director of Demand Generation for Structurely, a tech company that builds AI services for businesses that allow for personalized conversations with customers. Jones says that the cornerstones of his success are “dedication to understanding” and “commitment to strong sales support.” He is the host of this interview featured on Structurely’s Youtube channel which hosts a variety of people contributing to the conversation about and innovation of tech startups and AI development.

Guest Bio: Amanda Goetz considers herself as someone who is “Challenging the traditional models of employment and entrepreneurship.” She was the VP of marketing of the Knot Worldwide, which provides wedding planning services with a wide global reach. Currently she is the CEO of The House of Wise, a luxury CBD brand that seeks to empower women to take control of their lives. 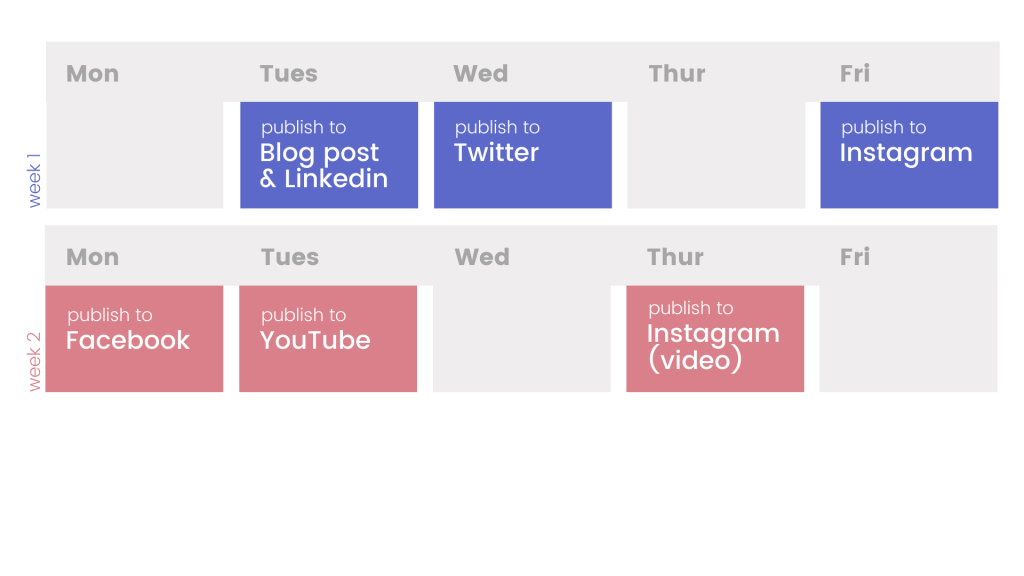