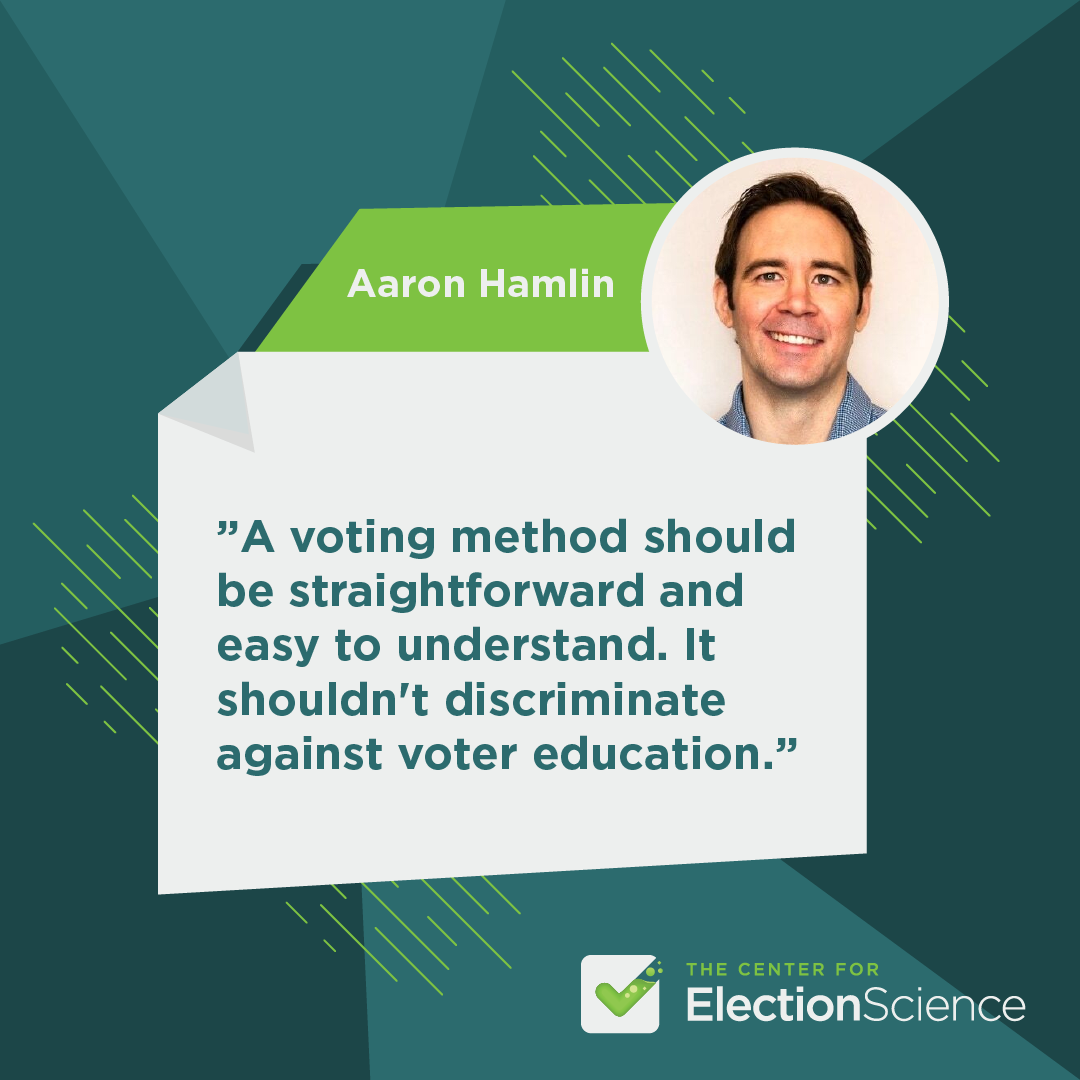 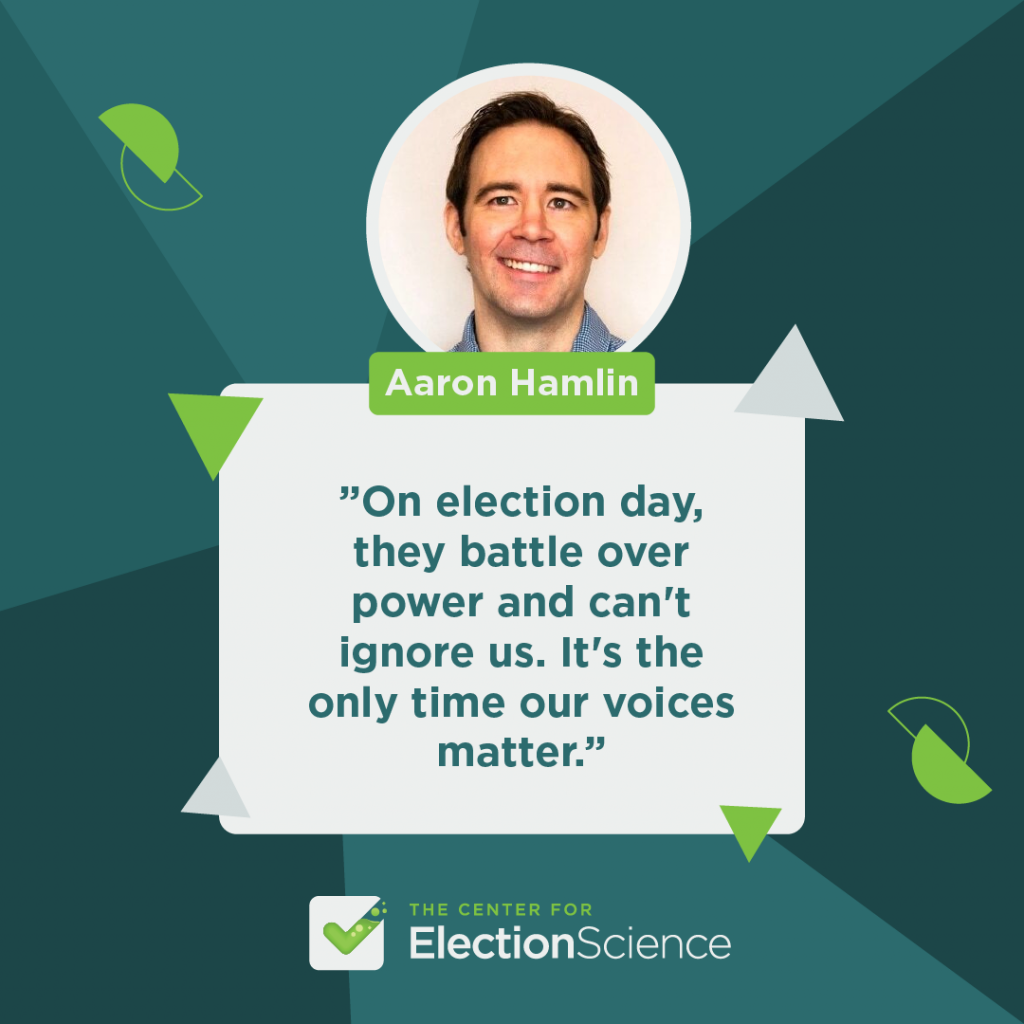 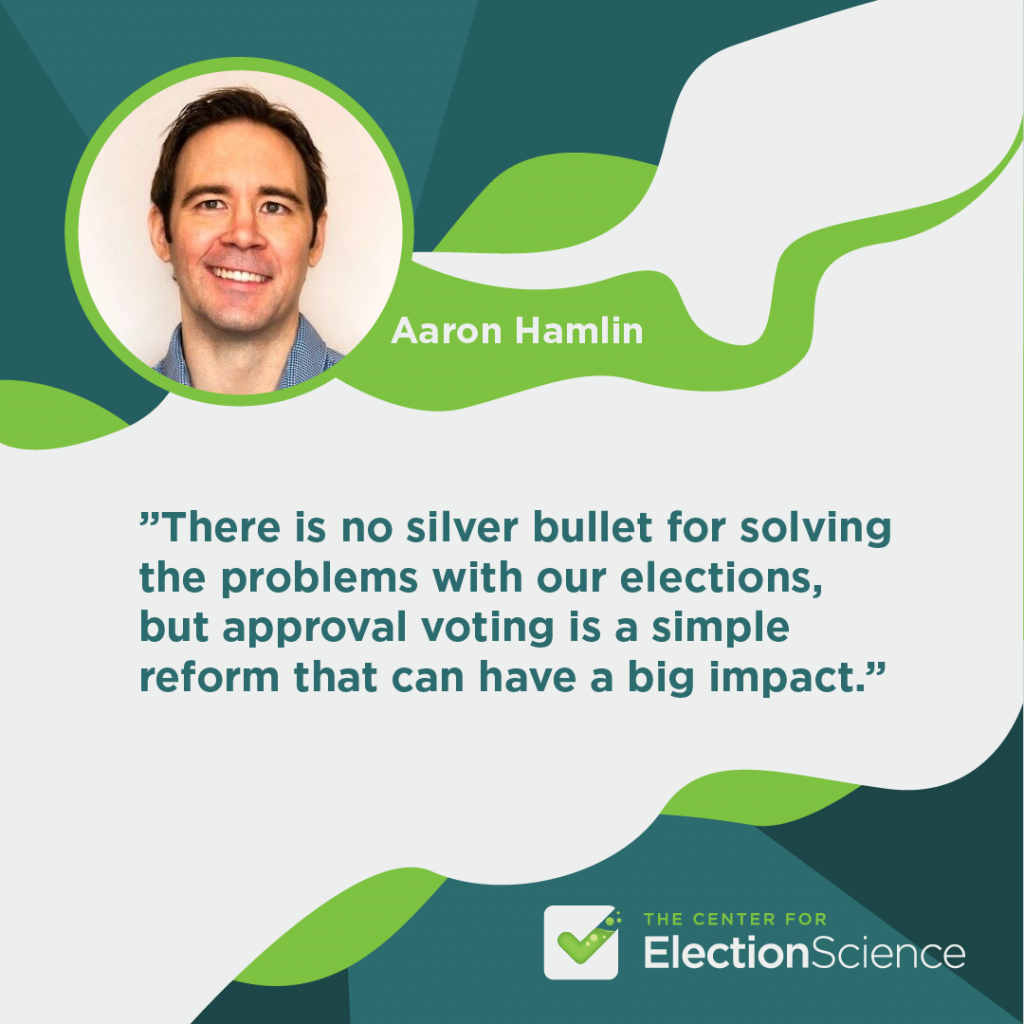 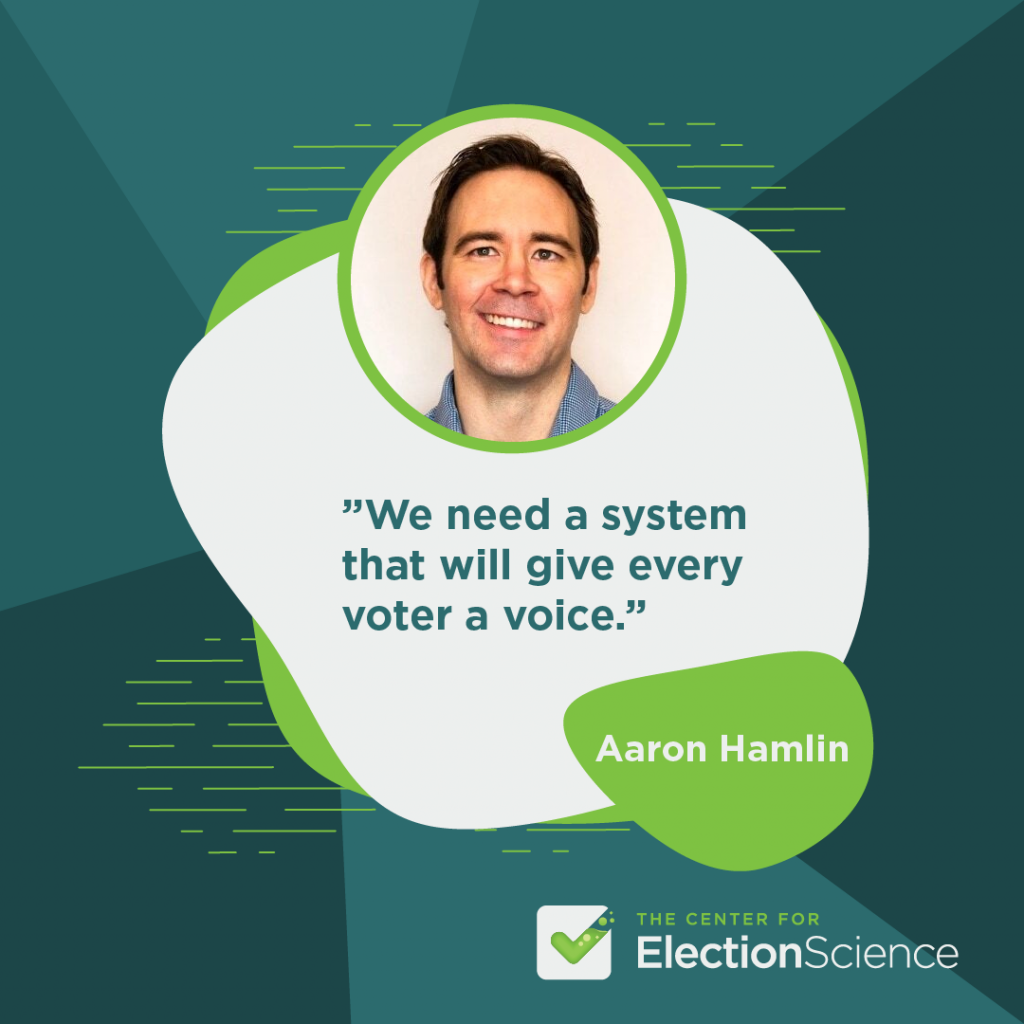 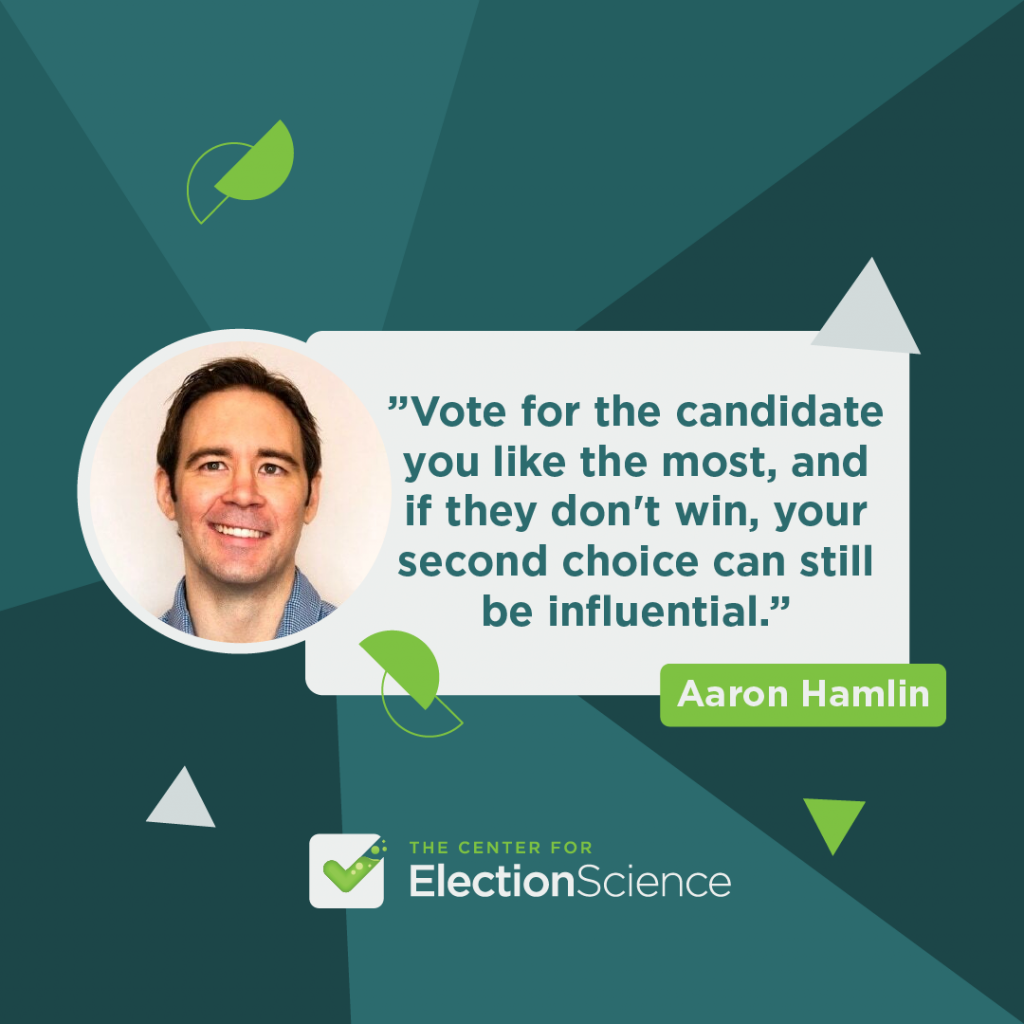 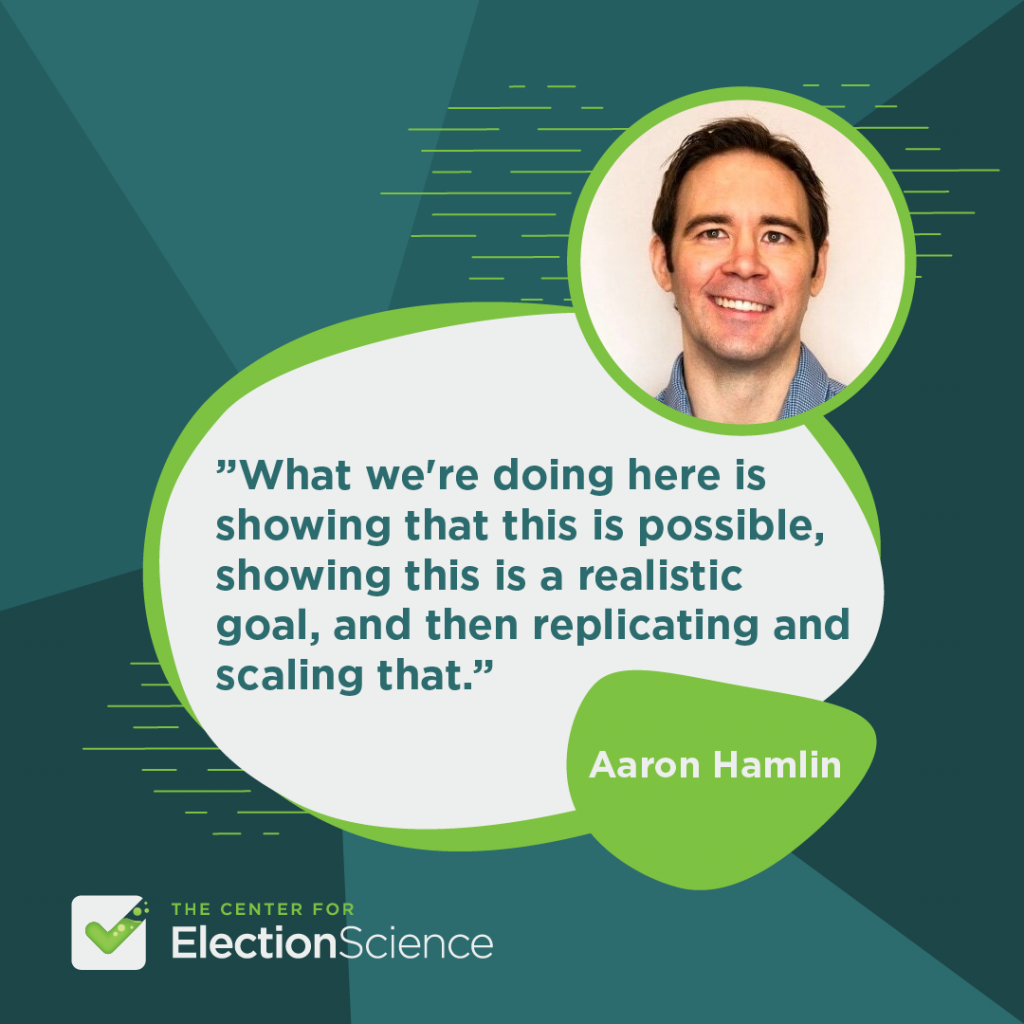 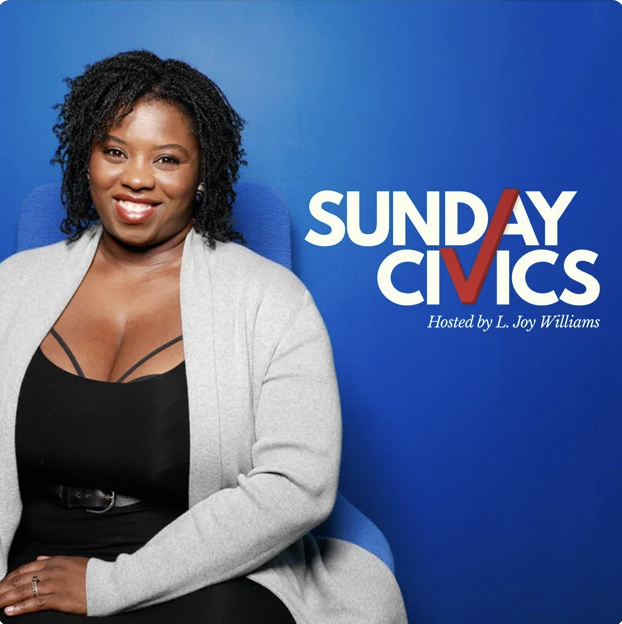 “A voting method should be straightforward and easy to understand. It shouldn’t discriminate against voter education.” -Aaron Hamlin

“On election day, they battle over power and can’t ignore us. It’s the only time our voices matter.”-Aaron Hamlin

“There is no silver bullet for solving the problems with our elections, but approval voting is a simple reform that can have a big impact.”- Aaron Hamlin

“We need a system that will give every voter a voice.”- Aaron Hamlin

“Vote for the candidate you like the most, and if they don’t win, your second choice can still be influential.”- Aaron Hamlin

What we’re doing here is showing that this is possible, showing this is a realistic goal, and then replicating and scaling that.” -Aaron Hamlin

“Methods of Voting” The Sunday Civics Podcast with Aaron Hamlin

In this episode of #SundayCivics, L. Joy interviews Aaron Hamlin about the different voting methods. He explains how it can improve our current plurality voting system and why approval voting is a better option. He talks about the importance of making our voices heard and how we can use our votes to create change. This kind of voting would allow for a more accurate representation of the population’s preferences.

Joy Williams: So Aaron, I want to get to the meat of our conversation and talk about approval voting. For someone you are talking to for the first time about what this means, how do you explain what approval voting is and what this voting method is?

Aaron Hamlin: I think a lot of times, we overlook the voting method itself, which is just the information that we put on the ballot and how that’s calculated. It’s easy to kind of overlook, like the whole point of this, which is we have some people who represent us, and their view should parallel that of the electorate that they’re representing. And they’ve got a lot of power. They decide the policies that govern our day-to-day lives, and they spend a lot of money concerning our tax dollars, and there’s only one instance when they can’t ignore us. And that’s on election day when we’re deciding whether they keep their seat or someone else takes their seat. For me, looking at this, if we’re given the wrong tool, our main tool for being able to decide who sits in the seats if that tool is broken, then we have some pretty big issues on our hands because that’s the only time when they can’t refuse to listen to us. And so right now, when we go to the vote, we have this really limited tool, this “choose one” voting method. There are different names, like “plurality voting” or “first past the post.” But it’s this “choose one” voting method. And it causes all kinds of issues. So you like multiple candidates, you can’s choose multiple candidates, you can’t support them, you have no way to do that. And so you can only support one. And so, as a consequence, the support for all these candidates gets divided, and they get an artificially low amount of support.

This can also lead to more polarized winners; you don’t get the same kind of consensus winner. And then also, in 2000, there were some interesting candidates in that election. That was the election when Ralph Nader ran. And for me, as an 18-year-old kid, looking at that, I didn’t think about any of that. And I think part of that was the environment where you’re told, “Hey, these are the frontrunners. Vote for one of the frontrunners. If you vote for anyone else, if you even think about voting for anyone else, you’re going to be wasting your vote.” And that produces some pretty terrible things. And approval voting addresses all those things in a very simple way. So with approval voting, you simply select as many candidates as you want. And the candidate with the most votes wins. You’re not ranking or anything complicated; you just check as many as you want. The only difference on your ballot is the directions that just tell you to choose as many as you want, instead of just one. And so if there are multiple candidates, and you can choose multiple of those candidates. If there’s even a third party or independent candidate that you like, even if they don’t seem viable or likely to win, you could support them. And then if there’s another candidate that you like, that you think is more viable, you can support them, too, or not. Do whatever you want. You just have a lot of flexibility in a way that voters really haven’t been given the advantage for previously.

Joy Williams: Mainly, a lot of the voting method changes so far have been on a local level, like municipal elections. Do you see on the horizon any potential change or how we can chip away at federal elections and the method there?

Aaron Hamlin: The interesting thing with the approval voting, as well, even though it’s newer to the game, it’s been moving quickly. We first had to show proof of concept and get it implemented in its first city, which we did within a year of our funding. So we got approval voting implemented in Fargo within a year of our initial funding. Also, we hired our staff within that same year. For those of you that are familiar with running organizations, that’s lightspeed, or for baseball fans, that’s ludicrous speed—and then getting St. Louis right after that. And so what we’re doing here is we’re showing that this is possible, showing this is a realistic goal, and then replicating and scaling that. And going into like a major city like Seattle, it’s the 18th largest city in the nation, we’re now preparing to move into states, as well.

When you change the voting method at the state level, you also simultaneously hit federal seats, as well. We’re talking about US Senate seats and US House seats. And I know we’re not going into the presidential stuff, but you can do that when you establish it at the state level, you can change the way that our electoral votes are assigned. And so you can have the presidential election for that state also use approval voting, for instance, like RCB did this in, in Maine, and they now use rank choice voting in Maine for presidential elections. As I pointed out before, it didn’t really make a difference for the amount of support that third parties got, but they were able to use that voting method and the same for us. When we’re pushing approval voting in different states, which we will do in the future, perhaps not too long, we can change the way that the Senate seats and the House seats are elected and allow all the voters to be able to use approval voting in those elections, which I think will be really cool because the US has a lot of polarity within these federal seats in terms of who gets elected. And then, on top of that, you just really never see a third party or independent, whereas with approval voting, the candidate will still have to be really strong, but they’ve got a shot in a way that they have never had before. So we’re really excited to see this in federal seats.

Joy Williams: I read one of your pieces on Medium, where you talked about what makes a voting method good. And you said, besides making it simple for the voter, one of the things you highlighted was having a “good winner.” What is a good winner? And you talked a little bit about that in terms of evaluating candidates. Everybody says they don’t want mudslinging candidates and negative campaigning. But people do it because it works with a small percentage of people in terms of showing differences between candidates. But makes a good winner? Because that seems subjective. A good winner to you could be different than it is for me.

Aaron Hamlin: We’re a science-based organization. My academic background is in the social sciences. And a big part of that science is being able to measure. And so the quickest way to answer that is someone that is a consensus-style candidate, someone that appeals to the broader group, and may not be a perfect fit for everyone. But on the whole, this is the candidate with the broadest appeal for everyone, that the bulk of people find acceptable. And also it could mean people are very enthusiastic about this candidate, too.

Another example of a good winner is what we might call the “max utility candidate.” One innovation that we’ve taken with analyzing voting methods is polling, and we asked respondents how they would vote in different voting methods for some selection of candidates. And then, in addition to that, we would ask them, “ I want you to be honest and say how you would, how much you want this particular candidate to be elected on a scale of zero to five, and go ahead and do that for all the candidates.” And so here we have an honest, what we would call an honest assessment scale, which is really a control measure. And so this gives us an idea of what each individual respondent has in terms of the utility level for each candidate. And you can add up all that utility for each respondent on each of these candidates and see what that looks like from the population or the or the constituency as a whole. And from that group level, we can see what maximizes the utility for the entire group or that community.

Joy Williams is a well-known political strategist, public speaker, and social justice advocate. She is the host of The Sunday Civics Podcast, a show that explores how to create change through activism and civic engagement. She is a trusted voice in the political landscape, and she has been featured in SNBC (“Up with David Gura,” “Melissa Harris-Perry Show,” “AM Joy”), and NY1 (“Inside City Hall”). She is the current President of the Brooklyn NAACP, which shows her leadership and dedication to her community.

Aaron Hamlin is a respected attorney and the executive director of The Center for Election Science, a non-profit dedicated to implementing approval voting in cities across the United States. He earned two graduate degrees in the social sciences and has appeared as an expert on electoral systems on MSNBC.com, NPR, Free Speech TV, Inside Philanthropy, 80K Hours, and Popular Mechanics. He has also written about elections for Deadspin, USA Today Magazine, the Independent Voter Network, and other publications. It was a pleasure to have him on the show.